Drawing, doing yoga and making pottery aren’t part of the typical hospital experience, but at the 25-bed Sacred Heart Hospital in Port St. Joe, Fla., patients report feeling better as artists-in-residence engage them in such activities. Staffers there also participate, doing yoga and tai chi exercises at hospital relaxation stations. At Jackson County Memorial Hospital, a Critical Access Hospital in Marianna, Fla., cancer patients participate in art therapy. Patient surveys indicate it helps them cope with treatments. Sacred Heart’s staff reports reduced job stress and improved performance. The hospitals are part of the Arts in Healthcare for Rural Communities initiative, a joint effort of the Florida Division of Cultural Affairs and the University of Florida Center for Arts in Medicine (AIM). 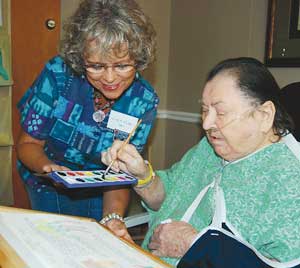 A patient at Calhoun Liberty Hospital enjoys working with a visiting artist, part of an arts in health care initiative in the Florida Panhandle.

“All 11 of our rural sites are doing outstanding things,” says Jill Sonke, AIM assistant director. “It’s exciting to see how enthused these communities are about the positive things they see happening. All programs enhance the quality of care for patients and staff, utilizing the visual, performing and/or literary arts. Programs vary widely because each community defines its needs.”

Begun in 2008, AIM encompasses six counties and two communities in the Florida Panhandle, a region Sonke defines as “almost all rural.” Weems (pop. 1,200) was selected as the first program site because of its creative resources, including a local arts club. The Weems community began its arts program with a Zumba dance class that met twice a week in a building with no air conditioning or heat. Still, Zumba fever spread rapidly, attracting a diverse group of all ages. Other arts and health-related events evolved. Community supporters also partnered with Meals on Wheels to offer arts activities for residents too ill to leave home.

“We had a sculptor working with a very sick person who became so engaged in the process and so prolific that he was able to do an exhibit in the community before he died,” Sonke said. “The community celebrated him and recognized him at this late stage in his life.”

AIM is collecting data and assessing the potential for their rural model’s sustainability. Sonke said effective models exist in urban healthcare settings, but rural programs have different needs and challenges. Data results to date are very encouraging, she added.

For instance, a six-week multidisciplinary pilot program study was established to improve child obesity in a population where 50 percent of children were obese. Children ages 6 to 11 in the pilot study reduced their overall body mass index (BMI) from 89 to 84 percent. Salud Immokalee incorporated dance activities three times a week along with family classes with a psychologist. Seventy-five percent of parents reported their child increased the amount of time spent on physical activities by an average of 56 minutes per day. Nearly three-fourths of students reduced TV and video time by 213 minutes per week. Data scoring also indicated that 41 percent of children experienced improved social behavior and conduct.

Arts programs targeting the whole environment of care have been shown to reduce stress and improve job satisfaction among nurses, Sonke said. “These programs also provide positive distraction for patients, sometimes even reducing the need for pain medication,” she added. “When people engage in fun, creative, productive activities, they get motivated and overall well being improves.”

AIM’s data analysis should be published next year. Sonke says she believes their model is workable for rural communities anywhere in the United States. AIM funding comes from multiple sources, ranging from local arts councils to state and federal grants.

“I can’t say enough good about how this program has transformed the rural communities where it is,” said Bob Pannell, director of the Florida Office of Rural Health, which provides staffing and development support for the program. “It encourages great community participation among residents to improve their health and quality of life in rural communities using art as the focus.”

In addition to presenting the rural model at national conferences and doing training sessions in several regions of the United States, AIM staff has developed a toolkit available online. For more information, see UFL Center for Arts in Medicine or contact Jill Sonke at jsonke@ufl.edu.