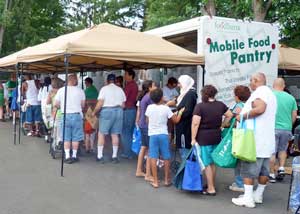 Long lines form for this mobile food pantry, run by the Food Bank of the Southern Tier (FBST) in New York state.

Steven and Jeanne Foster have been living in Lima, Ohio, since their car broke down last summer enroute from Michigan to Florida, where they planned to move. The expensive, lengthy car repair was the first in a series of financially challenging events that included Steven having a heart attack and Jeanne being hospitalized for liver problems. This formerly self-sufficient couple found themselves among the 6.1 million Americans last year that turned to a food pantry when they couldn’t afford to put food on their table.

“The (Allen County) veteran’s food pantry immediately helped us,” said Steven, a Vietnam veteran. “The Blue Star Mothers that run it are like saints to us! They even brought us gift boxes of food at Christmas. They’ve really been there for us through a rough time.”

In America, known as the land of plenty, plenty of people are hungry. They are termed “food insecure,” meaning their food intake was reduced and eating patterns disrupted because the household lacked money for food. (See Is Food Insecurity the Same as Hunger?).

“Food is the most basic of all human needs,” asserts Lisa Hamler-Fugitt, executive director of the Ohio Association of Foodbanks (OAF). “Unfortunately, we are seeing increasing need. We have a lot of households that have become situationally poor due to job losses, people with illnesses or disabilities, veterans struggling to re-enter the workforce, people on fixed incomes who suddenly incur high medical costs, and working parents with children to feed.”

During fiscal year 2012, OAF distributed 45 percent more food than at the height of the recession three years ago, Hamler-Fugitt said. In Arkansas, Loaves and Fishes Food Bank of the Ozarks (no longer available online) has seen the number of people it serves steadily rising in the last two years. Both Arkansas and Ohio have food insecurity rates higher than the national average, Arkansas at 19.2 percent and Ohio at 15.5 percent.

Food insecurity exists in various degrees in every county in every state, according to Feeding America, which supplies more than 3 billion pounds of food to 200 member food banks across the nation. Seventy-four percent of food pantries, 65 percent of food kitchens, and 54 percent of shelters in the Feeding America network reported steady increases over the last six years in the number of clients seeking assistance at their sites. Fifty-seven percent of food insecure households reported receiving assistance from the three largest federal nutrition programs: Supplemental Nutrition Assistance Program (SNAP); Women, Infants and Children (WIC); and the National School Lunch Program.

In addition to federal nutrition programs, food banks are the primary mechanism for addressing the problem of hunger. Food bank operators purchase and collect food from a variety of sources, including large manufacturers, wholesalers and grocery stores, farmers’ unmarketable or surplus produce, federal assistance programs and private donations. Food may be distributed to individuals directly from a food bank or through member partners such as social service agencies and faith-based operations.

“Every dollar we get goes to feed hungry veterans and their families,” Wharton stressed. “When they come in here, we give them a grocery card and a volunteer goes with them to pick out food and household items. We try to be sure that each veteran gets eight pounds of meat. Most of the vets using our pantry are elderly or disabled, and living on fixed incomes. They are very grateful. ” 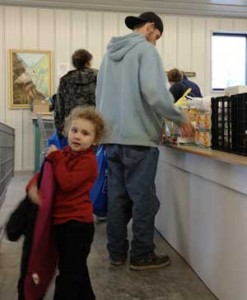 Over the last two years, Loaves and Fishes Food Bank of the Ozarks in Carroll County, Ark., has seen has a steady increase in the number of people it serves.

Four times a week, 60 Carroll County volunteers gather at the faith-based Loaves and Fishes Food Bank to do everything from government-required paperwork to packaging food and helping people who come for assistance. The majority of clients are senior citizens, disabled people and low-income working families with kids.

“As Christians, we believe God wants us to help the poor,” said Sara Hodgson, a postal worker who volunteers as executive director. “We don’t ask our volunteers what religion they are. We just ask that they have a heart of service to help feed the poor.”

Loaves and Fishes, which has been in operation since 1985, exists on donations from area churches and individuals. In 2007, the food bank outgrew its rental space. A private donor set up a match challenge to raise funds for purchase of a larger building in Berryville. Fundraising efforts were so successful that the board of directors paid off the building in five years.

“When you look at our small beginnings to where we are now, it’s truly been a miracle,” Hodgson said. “But the needs keep increasing. A lot of our people just come when they absolutely need it. We have more people coming that never have come before too. When we see the income levels of some of these retired people or single working moms with two or three kids, it’s amazing they can make it at all.”

Assessing the extent of rural food insecurity is difficult because location and economic status vary so widely in regions labeled as rural, said Clare Hinrichs, a Pennsylvania State University associate professor of rural sociology and author of several food system studies. These factors also greatly impact existence and sustainability of rural food systems. Dwindling numbers of rural grocery stores and the proliferation of gas station convenience stores have contributed to a cultural shift contributing to food insecurity (see Food Deserts). Although there is interest in local and regional initiatives that encourage food access using local and regional producers, the majority of those efforts are in metropolitan areas.

“While there is often a spirit of mission and service in rural areas, entrepreneurial kinds of long-term ventures (like rural farmers’ markets) are simply less likely to succeed where the population is aging or there is high poverty, and capacity-building efforts may face special challenges due to that demographic mix,” Hinrichs said. “That doesn’t mean it’s impossible, but it may not be easy.”

Forty-two percent of people OAF serves report having to choose between paying for food, medicine and medical care, Hamler-Fugitt said. “I feel rewarded every day when I see the kind of commitment we have in Ohio where public and private resources are working together to reach people where they live. It’s so inspiring. But we need to take serious pause in this country. Something is fundamentally wrong when people work every day and don’t make enough to meet their basic needs or when people who have spent their entire life working have one illness or crisis that robs them of what is supposed to be their golden years.”