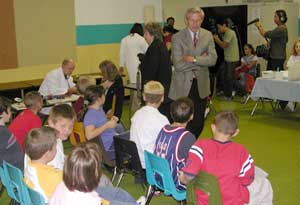 Dr. William Neal visits with W.V. school children during a health screening day for the CARDIAC program, which measures factors including weight, cholesterol and BMI.

The burgeoning field of health promotion aims to tackle the obesity epidemic by focusing on improving overall health through a variety of means, such as public education, behavior modification programs, and legislation and policies that positively influence health dynamics.

“Simply put, health promotion is the process of empowering people to achieve the best health possible,” says Alana D. Knudson, co-director of the Walsh Center for Rural Health Analysis at NORC. “We have to look at all dimensions that interrelate and contribute to overall good health.”

Adult obesity rates have doubled and childhood obesity rates have more than tripled since 1980. One-third of Americans are considered obese and more than one-fourth of current health care costs are related to obesity. In addition, rural residents experience higher rates of obesity and overweight than people living in urban areas, and the prevalence of overweight and obesity is higher among rural children than urban children.

“One of the primary things we’ve seen over time is how sedentary our life and work has become,” Knudson said. “Living in a society where many tasks require no real movement negatively impacts health. For example, 20 years ago children spent time playing outside together and now they often interact on electronic devices. Adults who spent a good portion of their workday moving around may never leave their desk now. Even occupations that were once considered physically demanding, such as farming, are much less physically demanding due to improved technology.”

From local community programs to federal legislation, efforts are underway to reduce obesity. Here are three programs, featured in past issues of the Rural Monitor, whose obesity-related programs have received national acceptance and recognition since that initial coverage.

In 2011, the American Academy of Pediatrics (AAP) adopted new guidelines recommending that children nationwide between 9 and 11 be screened at least once for high cholesterol and again between ages 17 and 21. The recommendation is based on a scientific data study of 20,000 school children enrolled in the CARDIAC (Coronary Artery Risk Detection in Appalachian Communities) Project (Rural Monitor, Winter 2011, no longer available online). CARDIAC founder Dr. William Neal said the national data confirmed that a small percentage of children who do not meet targeted screening guidelines based on familiar risk factors can still have high enough cholesterol levels to merit consideration of treatment with cholesterol lowering medication.

CARDIAC has screened more than 140,000 West Virginia school children since the program’s inception in 1998. The statewide program does screenings at certain grade levels for cholesterol, height and weight, BMI (Body Mass Index), blood pressure, and other risk factors. Children whose screenings identify issues that increase risk of chronic disease are referred for intervention.

To improve local services, CARDIAC has hired area coordinators to work in their communities doing screenings and implementing interventional strategies. To date, Neal said, community partnerships have produced nutrition and activity-related improvements such as the development of walking trails, school gardens, and nutrition and physical activity classes.

Students from the West Virginia University School of Medicine also recently completed research using CARDIAC data. They will present their findings at a national conference this spring. Neal said they became so enthused about their research that they’ve volunteered to initiate a pilot health promotion program in the schools.

Since Eat Smart, Move More South Carolina now Wholespire (ESMMSC) received the national Community Champion Award for making a difference in childhood-obesity prevention (Rural Monitor, Winter 2011, no longer available online), the nonprofit organization has grown to include 20 local chapters, the majority of them in rural areas.

Okatie Elementary in Okatie, S.C., is among 14 schools participating in Eat Smart garden projects. All Okatie students are encouraged to plant and tend the school gardens. Special events at school, such as “collards and corn bread day,” promote healthy eating. So far, about 70 students and their parents have joined the school garden club. Families learn about healthy eating, and children raise vegetables in containers at home.

“Studies show that children who plant gardens are more likely to view vegetables favorably and therefore make healthier food choices,” Freeman said. “Garden projects vary from school to school, but a common denominator is that all of them grow vegetables and hold ‘taste and see’ events.” 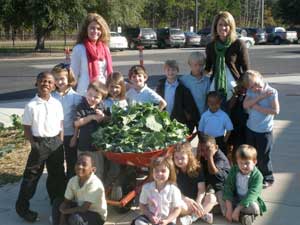 ESMMSC is also reaching out to worksites. For instance, in February ESMMSC began distributing a new toolkit to be used in doctors’ offices. Toolkit components include information to help medical providers have conversations with parents and children about lifestyle changes such as increased physical activity and limited screen time.

Since it first appeared in the Spring 2004 Rural Monitor (no longer available online), the Ho-Chunk Nation has continued its efforts to combat obesity and diabetes among Native American youth, expanding services to include adults. Last March it was selected for inclusion as one of 50 teams in Collaborate for Healthy Weight, an anti-obesity project supported by the National Initiative for Children’s Healthcare Quality (NICHQ) and Health Resources and Services Administration (HRSA).

Ho-Chunk’s NICHQ pilot project targets 50 youth from 5 to 18 years old living in Sauk County where more than 35 percent of residents are obese. Diabetes Project Coordinator Karena Thundercloud said the youth participate in planned activities such as planting and maintenance of a community garden, weekly meetings with nutritionists, and planned physical activity such as Zumba classes. Area medical providers are collecting and compiling data.

“We’re considering this project an anti-diabetes initiative and we’d like to have it become a program that the entire tribe participates in,” Thundercloud said. “About 25 percent of our Nation members are diagnosed with diabetes. Diabetes is occurring in younger and younger people. But it can be reduced with healthy eating and exercise.”

Ho-Chunk also introduced a self-referral weight loss pilot program in January with education and monitoring. Exercise physiologists in Black River Falls and Tomah lead fitness classes and an employee fitness room has been added in the executive building. The tribe has approved giving employees 90 minutes a week of paid work time to exercise.

There are signs of success. Childhood obesity rates are leveling off, and some cities and states report modest declines, according to a September 2012 brief issued by the Robert Wood Johnson Foundation.

Throughout the nation, health care leaders at all levels are recognizing that health promotion may hold the key to reducing chronic disease and disabilities as well as health care costs.