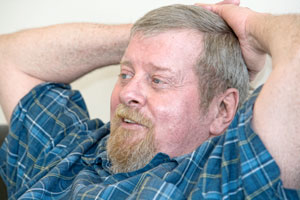 Switchpoint Community Resource Center gave Bill* a home after he’d spent six years being homeless. SCRC staff placed Bill in a job and has worked to help him with the readjustments.

Housing First. It’s a seemingly simple solution to chronic homelessness, which has burgeoned into a complex problem for social service agencies and states across the nation. Utah’s success with it is admirable: Chronic homelessness has declined 72.1 percent since the state initiated its 10-year Housing First plan in 2005.

“Champions, collaboration and compassion” are the components that have led to Utah’s success, according to Lloyd Pendleton, Director of the Homeless Task Force for the last nine years. “When someone is hurting, we all hurt,” Pendleton said. “So we look for solutions that will work.”

There are also financial payoffs for the state. Estimates for homeless persons’ emergency medical bills average more than $16,000 a year, and legal and justice system costs average up to $30,000 per year, compared to housing the homeless at approximately $11,000 per year. Additionally, about 10 percent of chronically homeless people become self-sufficient every year with the additional resources the program provides.

Lack of shelter contributes to rural crimes, driven by the need to survive. In Grand County, the beautiful Arches and Canyonlands National Parks attract thousands of tourists during the summer. Winters are a different story. Moab, the county’s largest town with a population of 5,000, housed chronically homeless people in its jail every winter.

“They intentionally committed crimes so they could go to jail,” Pendleton said. “Fortunately, we have them in housing now.” 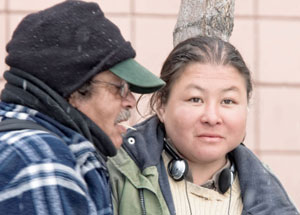 Chronic homelessness has declined 72.1 percent in Utah over the last 10 years. Housing is the first priority, and follow-up care helps homeless people get back on their feet. This couple has used the resources at Switchpoint.

Utah’s newest homeless facility, Switchpoint Community Resource Center, opened this fall at St. George. It serves rural areas within a 60-mile radius. In addition to housing for the homeless, Switchpoint’s facility has 13 nonprofit partners located in the building that work cooperatively with Switchpoint staff to provide easy access to resources for clients.

Within eight weeks of opening, Switchpoint had already placed 17 individuals in jobs.

Executive Director Carol Hollowell said she was almost as excited as Bill* the day he began working at a Utah national park after six years of being homeless and jobless.

“He was thrilled as punch at the thought of being stable,” Hollowell said. “He has mental illness and a low IQ so he had trouble getting or keeping a job. We got him on medication through a free clinic here and started calling employers that have indicated they are willing to work with our clients. We’ve found that following up with clients helps them much better maintain a successful environment long-term. We keep in continuous contact with their landlord and employer. Without that support, they tend to lapse.”

“People in poverty or homelessness live with what they know,” Hollowell commented. “To break the cycle, they need a switch point—like the mechanism on a train track that turns them in a different direction.”

Pendleton said caseworkers are key to all programs. They work individually with clients for needs such as medication, treatment and employment. Case managers collaborate with the Department of Workforce Services to match individuals to employment opportunities where they can be successful.

Services are not limited to the chronically homeless. Rapid rehousing supports families thrust into homelessness; permanent supportive housing and transitional housing meets the needs of those whose housing has been impacted by domestic violence or addiction.

“Family homelessness was really impacted by the recession,” Pendleton commented. “We had taken 800 chronically homeless out of the system so we were able to use those beds for families. Even though our unemployment rate is lower than the national rate, it was a big bump to absorb into our system. As our economy has improved over the last two years, the family homeless rate is dropping.”

Utah “repurposed” HUD funding, use of state taxes and the general funds budget to cover Housing First, according to Pendleton. The program is modeled after the Housing First program pioneered in New York City more than 20 years ago.

The state’s success has opened new doors for Pendleton. It’s also given him the opportunity to observe other efforts across the nation to end homelessness. He has participated in studies assessing programs in other states, spoken at homeless summits across the country and been a guest trainer for programs in development.

“Where there is a champion that takes this issue personally, they are having good results,” he said. “We have always had champions. We have a supportive Lieutenant Governor, great homeless service providers, and committed involvement from city, county and state leaders who understand this takes everyone working together toward statewide change.”

“Money doesn’t solve this problem, ” he asserted. “If you don’t have someone focused on results, you just throw money at it. We re-purposed money from some agencies that didn’t have results assisting chronically homeless individuals. It is important that everyone plays in the sandbox with everyone. Or state funds will be moved. Our vision is that there will be results.”

* The Rural Monitor does not use the full name of patients or clients, when requested.