Part two a two-part series on human trafficking. Read part one — “It’s on Us”: Healthcare’s Unique Position in the Response to Human Trafficking. 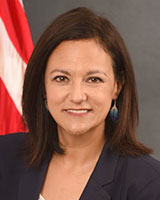 In 2019, she was appointed to represent HHS on Operation Lady Justice, a presidential task force created to address the crisis of missing and murdered American Indians and Alaska Natives. Much of Commissioner Hovland’s work intersects with the human trafficking of Native people. Hovland is a member of the Flandreau Santee Sioux Tribe located in South Dakota.

It seems that the issues of missing and murdered Native Americans (MMNA) and human trafficking go hand in hand. What do you want people to know about the correlation?

There are clear correlations between MMNA and human trafficking victims. However, unlike human trafficking, there is not a standard definition of MMNA. Therefore, it’s important to clarify two things. First, going missing is not always a crime and many individuals who go missing may return home or are located. In some cases, individuals go missing on purpose whether they are fleeing a domestic violence situation or are fleeing because of criminal activities. Second, we know Native Americans are disproportionately affected by all forms of violence ― domestic violence, dating violence, sexual assault, stalking, child abuse, and neglect. These factors contribute to an individual going missing, murdered, and/or trafficked.

Issues like these have gathered interest at the national level to bring awareness and solutions to Native American communities who have been affected by issues that contribute to MMNA. In 2019, President Trump issued an Executive Order on Missing and Murdered American Indians and Alaska Natives. This executive order created the Task Force on Missing and Murdered American Indians and Alaska Natives, referred to as Operation Lady Justice. To further emphasize that point, in 2020, President Trump issued the Executive Order on Combating Human Trafficking and Online Child Exploitation in the United States. This executive order called for coordinated efforts with Operation Lady Justice to emphasize that MMNA can be an outcome stemming from human trafficking. With this national platform to speak on these important issues, I along with other federal partners have the opportunity to support Native American communities.

I know you have many priority areas as Commissioner. Why is MMNA a big one for you?

For me personally, it is painful to continue to hear stories and meet the families whose loved ones either have gone missing or have been victims of a crime. Many of these families have never received answers or received a resolution or justice for their loved ones. In my travels, I have heard from tribal leaders who emphasize how important it is to get the federal government to engage on addressing this issue.

Before these executive orders, the response to MMNA has always been from the law enforcement perspective. Now with the support of the Administration and our other federal partners, I have the ability to support a comprehensive change within tribal communities to prevent MMNA. Now, tribal leaders are saying, “Department of Health and Human Services, we need your help in preventing more of our relatives from going missing, and we are asking you to come in and provide tools and resources for communities that need to heal. There’s a role for you, HHS, and we want you to be a part of this.” The outreach from tribal leaders has been overwhelming and I am glad to serve alongside them as we tackle this issue together.

Can you explain why Native people ― especially Native women ― are more likely to be targets of human traffickers and exploiters compared to other populations?

Victimization of Native people is nothing new, unfortunately. The U.S. Department of Justice issued a report many years ago as a first step for addressing crimes against Native people and found that, at every age, American Indians were victimized more than any other population. Different forms of violence and numerous social factors contribute to the vulnerability of Native women and girls. Some of these social factors may be attributed to rural areas and law enforcement jurisdictional barriers that arise when a non-Native commits a crime against a Native person within a reservation. In addition, rural areas pose a particular barrier due to the lack of law enforcement and services available.

Violent acts on individuals can affect them throughout their lifespan, and we know that human trafficking causes physical wounds as well as emotional wounds and trauma.

After a crime is committed on an individual, there is still more to do to serve that individual. This is where the public health side of the issue comes into play. Violent acts on individuals can affect them throughout their lifespan, and we know that human trafficking causes physical wounds as well as emotional wounds and trauma. In recognizing that, we are advancing an approach to MMNA and human trafficking that incorporates the role of our public health system across HHS.

Can you give an example of the role a community plays in a victim of human trafficking reentering their community?

There is a very well-known and well-respected tribal official who lives in a rural community. His daughter was lured away by someone on the internet who wanted to meet her and just like that she was gone. His daughter was trafficked for two months before she escaped. While her parents never had issues with her before, the community revictimized her because they didn’t understand human trafficking. The family is grateful that their daughter is alive and home, but this whole situation continues to be very traumatic for them.

So how do we move forward and help communities support a victim of human trafficking? We focus on education. Our response to cases like the one I shared needs to be addressed with compassion, understanding, and education on how to help communities support victims. We also need to focus on changing the perception of healthcare and human service providers who are not currently engaged on this issue so they understand how to serve victims. That is why we need to support upstream resources to improve the quality of life for vulnerable populations.

You mentioned coordination of government efforts. How are you involved in strengthening these partnerships to address human trafficking?

The Administration for Native Americans (ANA) is working closely with the Office on Trafficking in Persons (OTIP), which is a sister office within ACF. With our combined efforts, we’re working to reach all Native communities to bring awareness and tools to combat human trafficking. Together we are ensuring that Native populations, both on reservations and in urban settings, are represented and have materials that are culturally appropriate.

I also chair the Intradepartmental Council on Native American Affairs, comprised of senior leaders across HHS, to develop policies, initiatives, and resources for Native American communities. Two of our focus areas include human trafficking and MMNA. To help support these focus areas, we are developing a framework to better integrate services for high-risk populations ― those with mental and substance use disorders, our elders, individuals with disabilities, et cetera.

Our tribal leaders have asked that we improve support for prevention services, so we want to make sure that this framework helps both the survivors and their communities heal and not be revictimized. This framework will be a tool that includes partners across HHS and will address the social determinants of health with the goal of strengthening vulnerable populations.

As part of the Operation Lady Justice Task Force, you hosted virtual listening sessions with tribal leaders this year. What was the subject of your discussions and what are your next steps following those listening sessions?

During these virtual listening sessions, we heard an emphasis on the importance of survivor-informed policies and prevention and that violence is a common factor in human trafficking and MMNA.

Our plan is to do a couple of things. One, we want to tackle the lack of data, evaluate the kind of data we need, and figure out how to collect that data. Secondly, HHS is leading the charge in developing a community-level education and awareness campaign. So, the Operation Lady Justice Task Force is developing a campaign strategy and will consult with tribal leaders on the best way to reach their community members.

What tools are available to help healthcare and human service providers in Native communities learn how to identify human trafficking?

Our health and human service providers and law enforcement officers are often the first in contact with a victim who is being human trafficked, so being educated and trained to identify and respond appropriately is important.

We have worked with OTIP to develop SOAR (Stop, Observe, Ask, and Respond) for Native Communities, which is a free online training for professionals and Native community members to learn how to identify a victim of human trafficking and to know how to respond. Our health and human service providers and law enforcement officers are often the first in contact with a victim who is being human trafficked, so being educated and trained to identify and respond appropriately is important.

Rear Admiral Michael D. Weahkee, Director of the Indian Health Service (IHS), also encouraged his staff to take the SOAR module when it came out. He has been a great advocate and resource in getting the information out to IHS and tribal employees. I recommend that everybody who works with Native communities take this training.

You say youth have an important role to play in prevention of human trafficking. What has been the response to the Native Youth Toolkit on Human Trafficking that ANA developed in partnership with OTIP?

This toolkit, which we developed in 2017, is helping families, school administrators, afterschool programs and youth understand what human trafficking is and how to respond. At our annual ANA Youth Summit this year, which we held virtually, attendees had an opportunity to use the toolkit. The youth’s response was, “We want to be involved in these conversations and we want to be helpful in getting the word out about it.”

We have trained Bureau of Indian Education staff who are working with the U.S. Department of Education’s Office of Indian Education. Many of them are eager to “train the trainers” and then get it into school systems once they are back in session.

What lasting impacts do you predict the COVID-19 epidemic will have on trafficking Native people?

This is something we’re going to need to wait and see about. The perpetrators of human trafficking and violence are not easily deterred, so we will learn more about what is transpiring in our communities as conversations with our tribal leaders continue over the coming months. I have read reports about the increase in domestic violence during this pandemic. In a related way, it is likely that human trafficking has not lessened, but we do not have data at this time.

What final thoughts would you like to leave with our audience?

Our Native Americans are resilient people; we are survivors who will continue to be resilient through this crisis.

Our Native Americans are resilient people; we are survivors who will continue to be resilient through this crisis. The success we’ve seen can primarily be credited to the voices and actions of our people who have been fighting this issue for years. Native people are being seen and heard and our lives are being valued ― we are not invisible anymore. To the families who have spent years advocating for justice and answers for their loved ones, I say thank you for never losing hope. Your voices have been heard and I am proud to have the opportunity to be an advocate on behalf of our people.