On a black, rainy night, a honking horn and someone yelling, “Baby! Baby!” prompted Dr. Anne Brooks to open the door at the home she shares with four fellow Roman Catholic nuns in Tutwiler, Miss. A woman, pregnant with twins and obviously in the throes of labor, pleaded for help. Brooks sprang into action, directing her housemates to assist her as she safely delivered the first baby. The second baby was born in the ambulance that arrived moments later. 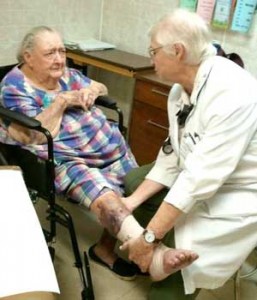 Sister Anne Brooks, D.O., named 2012 Outstanding Physician of the Year by the American Osteopathic Foundation, cares for the poor at the Tutwiler Clinic in Mississippi.

House calls and 12-hour days at Tutwiler Clinic have been part of Sister Anne Brooks’ routine for more than 30 years. At 74, Sister Anne’s only concession to her demanding schedule is a brief nap during her lunch break. Caring for 8,500 patients a year that live in the impoverished Mississippi Delta region might seem like sufficient challenge for a small town’s only physician. But Sister Anne is also responsible for keeping the doors open. Seventy-four percent of her patients live in poverty, and have no insurance or money to pay medical bills. Private donations account for more than 75 percent of the clinic’s current operating funds.

In addition to Sister Anne, the Roman Catholic nuns serving Tutwiler include a nurse practitioner, a registered nurse and a licensed counselor who all work in the clinic, and a community outreach worker who heads Habitat for Humanity (with 37 homes built and five currently underway).

“We have found another family here,” Sister Anne says. “We’ve been here a long time. We’re all gray-haired now and this community is home.”

After having worked as a teacher first and then returning to osteopathic medical school to become a physician, Sister Anne decided to settle in the Mississippi Delta region because it had some of the nation’s highest poverty rates. She sent query letters to several town councils. Tutwiler, with no doctor and a boarded-up medical clinic, responded first. Although council members later admitted they were extremely skeptical, they agreed to fix up the clinic.

Tutwiler’s residents were desperately poor and primarily Black. The racial divisions in the town were apparent, even though it was 1983. Sister Anne immediately removed the clinic’s waiting room partition that separated Black and White patients. Afterwards, some White patients who came to the clinic stood in the hallway rather than share space with Black patients.

Many of her patients lived in tin-roofed shacks. Because there was no indoor plumbing, impetigo was common. Unemployment was rampant. Those that worked were seasonally employed, doing hard physical labor in the cotton fields, or as household maids making minimal wages. Sister Anne treated everything from rat bites to gunshot wounds.

Over the years, Sister Anne has seen some improvements in lifestyle-related habits—such as getting workers in the field to wear proper attire when using chemicals, and getting some patients to eat healthier—but obesity, diabetes, heart disease and chronic lifestyle-related conditions like malnutrition and lung-related diseases continue to be major medical problems. High rates of tobacco usage and chemicals in the cotton fields contribute to asthma, COPD and other lung-related diseases. Lack of fresh, healthy foods, “fried everything,” and poor dental care resulting in loss of teeth and inability to chew foods all contribute to nutritional issues.

“We can’t change centuries of social injustice and economic slavery,” Sister Anne reflected. “As a nun, my job is to be as conscious, as I possibly can be, of those who have not, and to reach out to them. I receive much more from my patients than I could ever give them. What I do is more than a career. It’s my life.”

The nuns live simply on minimal salaries but Sister Anne says the fact that they are educated, eat healthily and own conveniences like a car and computer separate them from being truly poor like many of their patients. She added that poverty doesn’t define a person, saying that her patients are giving, loving and deeply spiritual.

Racial prejudice is no longer as strong as it was when she arrived. Today’s Tutwiler has experienced new growth and declining poverty. But old habits die hard and new challenges have emerged. Drug and alcohol abuse, along with crime, is on the rise.

“In many ways, things remain the same,” Sister Anne said. “Too many of our patients are just in survival mode. Their life circumstances make lasting change very difficult. We do a lot of education but it’s tough to change generations of cultural patterns.”

She has known and understands adversity. Born to an alcoholic mother and a Navy captain father, she grew up in Catholic boarding school after her father left her there when her parents divorced. The nuns inspired her with their selflessness and dedication to God. She joined the Sisterhood and, after getting her degree, taught school and volunteered at drug rehabilitation clinics despite her physical handicaps. She spent 17 years wheelchair bound and in pain before she found a doctor who correctly diagnosed her and ordered the treatment that restored her mobility. The experience inspired her to become a physician.

“God is very generous,” she said. “I praise God every morning for my health.”

Sister Anne has become somewhat of a reluctant celebrity, being named Outstanding Physician of the Year in 2012 by the American Osteopathic Foundation. She is also in demand as a presenter at national medical conferences and as a mentor for students majoring in allopathic, osteopathic and nurse practitioner programs. Students from all over the country vie to do their rotations in Tutwiler.

“My prayer is that one of them will decide to come back here and practice,” Sister Anne said. “More than anything, we really need another doctor.”

That’s not to say she’s retiring. She says there is still too much need in Tutwiler, adding, “When my brain goes, I guess I will go. I hope my legacy then will be 1,000 percent job satisfaction!”