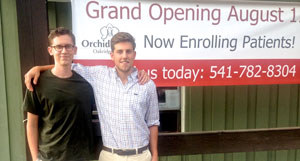 Oliver Alexander, left, and Orion Falvey are Oregon entrepreneurs who opened Orchid Health, a rural clinic in Oakridge, Ore., that provides affordable primary care for anyone who chooses to become a member. Their model has received several awards.

Two years ago, two college students with no healthcare background or experience decided to tackle a vexing issue: how to provide primary care to low-income rural residents. What began as their project for a student competition has turned into a reality. In August, University of Oregon business graduates Oliver Alexander, 22, and Orion Falvey, 24, opened Orchid Health, a for-profit rural clinic offering affordable health care in Oregon’s Lane County.

Within only six weeks of opening, 428 patients had enrolled as members of Orchid Clinic, located in Oakridge. “That’s pretty much unheard of for a new clinic according to all our research,” Falvey said. “Many of our members hadn’t been able to get healthcare.”

Alexander and Falvey are determined to prove that the thousands of hours they spent researching, developing their model and recruiting providers that share their vision can serve as a model for the rest of the nation and, particularly, for the state of Oregon.

Orchid Care Plan offers a monthly membership for anyone who wants to join, regardless of insurance status. These members are then eligible for unlimited primary and preventative care appointments; monthly fees range from $39 to $69 a month, depending on age. Medicare and Medicaid patients are not included in the monthly plan but can still get services there, with those programs billed for their care. Nonmembers with private insurance pay cash for their visits, but then can submit their bills to their insurers.

Removing primary care and preventative care out from under the umbrella of health insurance allows these essential services to be provided at more affordable prices, Alexander said. Providers also are able to spend more time with patients because they spend less time on insurance-related duties. As a certified Rural Health Clinic located in a Medically Underserved Area, Orchid Clinic also benefits from federal incentives for accepting Medicare and Medicaid patients.

Another advantage of this model, according to Falvey, is that patients with chronic medical conditions can be better managed at the clinic through regular visits. “We would only refer out if they needed specialist treatment,” Falvey said. “We have a network of specialists that we know accept Medicaid and/or have sliding scale fees for the uninsured.” 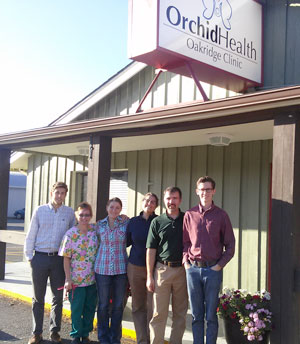 Recruiting staff to a rural area and an unproven model wasn’t as difficult as some might assume.

“Our providers see this as a way to get back to delivering medical care and helping people rather than working in a flawed system,” Alexander said. “Providers are frustrated with the current system because they are forced to see a huge volume of patients each day. They feel like they are shuttling patients in and out and compromising quality care. Dr. (Mike) Henderson actually came to us and said he’d like to be involved.”

When word spread that Falvey and Alexander were looking for a site, Oakridge Pharmacy owner Laurie Pattie encouraged them to locate there. The men’s research showed that Lane County Health Department and Social Services had looked at extending care to Oakridge but decided it wouldn’t be sustainable. Estimates from the Oregon Office of Rural Health indicated that over two-thirds of necessary medical visits in Oakridge were unfulfilled. Roughly one-half of Oakridge’s total population was not being served. Estimates about unserved populations didn’t even include Medicaid, Medicare and uninsured patients who weren’t receiving services at all. In Lane County, about 95,000 residents are on the Oregon Health Plan (Medicaid).

Ninety percent of Oakridge residents said they were unsatisfied with local healthcare service availability, according to a survey Alexander and Falvey administered. Travel time to medical clinics in other locations is a minimum of 45 minutes.

The students-turned-entrepreneurs knew they had their location. They raised over $240,000 in start-up funds, including a loan from the City of Oakridge to refurbish an existing building for the clinic, and $70,000 from Lane County lottery funds.

“We had a group of passionate business advisors that helped us,” Falvey said. “There were a few naysayers who saw it as something kids with rose-colored glasses were trying to do but that comes with every business start-up. For the most part, the community was very supportive.”

“We were going after a target community where other groups hadn’t been successful,” Alexander noted. “As we kept researching, spent time in the community and showed them our business model, they became even more supportive and realized we could be successful.”

When they first began their student project, both men said they knew they wanted to focus on a social issue and both were interested in healthcare. Falvey grew up in a small Alaska town where access to services was very limited. As a boy, Oregon native Alexander watched his father successfully battle with cancer, and then in high school, he participated in a project redistributing medical waste and supplies to Third World countries.

“Healthcare is such a central part of a person’s overall happiness and success in life,” Falvey said. “But hundreds of thousands in Oregon, particularly in rural areas, don’t have adequate access. We wanted to impact people’s lives.”

Alexander said the Angel Conference is one of the state’s largest business events, putting time and money into promising start-up companies. Receiving the awards has opened doors to broader funding opportunities and approaches from other major seed funders.

“The Oregon Office of Rural Health has been so valuable to us all along the way,” Alexander commented. “Their data and guidance has been one of the most important pieces to our success so far.”

Oakridge is just the pilot site. These men plan to keep growing their concept in other rural Oregon towns. They’ve just begun.