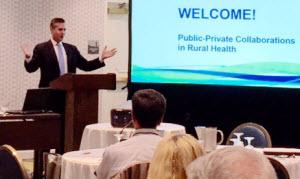 Alan Morgan, CEO of the National Rural Health Association, welcomes participants of the third annual Public-Private Collaborations in Rural Health meeting on May 11, 2015.

Foundation representatives, federal officials, and national associations engaged in spirited conversation surrounding topics related to rural healthcare, creating and solidifying a partnership between rural federal programs and rural-focused trusts and foundations that would center their work on rural health equity and leadership development over the next two years.

This was the scene at the third annual meeting of Public-Private Collaborations in Rural Health, held May 11-12, 2015 in Washington, D.C. The Collaboration, which sprang from the White House Rural Health Council’s mission to support rural communities, works to discuss and shape joint opportunities for increasing access to quality healthcare and health equity for rural populations.

Together, the invited philanthropic organizations invested well over $150 million in rural healthcare during the past year.

In 2013, the Federal Office of Rural Health Policy developed the framework for the Rural Health Philanthropy Partnership, pulling in foundation executives, federal government agencies, and other key national stakeholders, such as Grantmakers in Health and the National Rural Health Association.

From the onset of the effort, Faith Mitchell, President and CEO of GIH, and Alan Morgan, CEO of NRHA have been involved in planning and supporting the work of the Collaboration. “It is certainly our hope that these partnerships will promote the development of innovative healthcare solutions which can be replicated nationwide,” said Morgan.

The goal was clear: develop open lines of communications, collaborative funding efforts, and strategic partnerships that would align the rural initiatives of the federal government and the work currently being done by foundations across the United States.

During year one, the meeting introduced the key topics that various federal agencies manage and facilitated professional connections between foundation executives and government officials.

“The first year was really just trying to get foundations to understand what was available to them in terms of federal agencies and resources. At the same time, we wanted to learn about their work, including their primary areas of interest and how they operate, so that we could all be more informed about the best way to partner together,” said Sahira Rafiullah, Deputy Associate Administrator of FORHP.

Those connections proved to be a powerful tool for foundations who are working in the field. Rafiullah said she hoped to be able to show foundations the opportunities available to rural communities that may not be well-known. Even more importantly, Rafiullah hoped to introduce the real people behind those federal opportunities, who want to help rural organizations and foundations succeed.

I feel like I have access to people who will pick up the phone and answer my call now. Knowing someone personally in HRSA and SAMHSA and having them plan with us, and not for us, is so important.

“I feel like I have access to people who will pick up the phone and answer my call now,” said Kim Tieman, Program Officer for the Claude Worthington Benedum Foundation. Tieman has participated in the Collaborative since its inception and touts some of the benefits. “Knowing someone personally in HRSA [Health Resources and Services Administration] and SAMHSA [Substance Abuse and Mental Health Services Administration] and having them plan with us, and not for us, is so important.”

In turn, the foundations were able to explain the hows and whys of their operations, going over priority areas, decision-making processes, and the valuable resources they could bring to the table.

“We realized that through our combined investment – time, money, technical assistance – we could really make an impact together,” said Rafiullah.

While both the federal government and foundations work to create change in rural areas, the scope of their efforts are vastly different. Creating an effective collaboration is not without its challenges.

“Foundations have the ability to bring a different working relationship with grantees to the table. We have longer experience with certain sets of grantees and our ears to the ground,” said Kim Moore, President of United Methodist Health Ministry Fund.

The federal government is tasked with achieving impact at the national level, while foundations generally focus on regional, state, or local levels.

“The feds bring a vision about what could be, and what needs to happen, in rural communities,” continued Moore. “I think they help us get our eyes lifted up to the possibilities of what might be.”

We get information from the field about what’s really brewing, what’s important and what’s current.

Rafiullah is quick to point out that the relationship is mutually beneficial. “We get information from the field about what’s really brewing, what’s important and what’s current. We’ve also learned some important considerations in developing and managing evidence-based programs, which is the standard of many foundations and trusts.”

A Call to Action

During the second meeting, attendees focused on creating meaningful changes through action. Participants discussed issues and trends in rural healthcare and, at the meeting’s conclusion, agreed to an idea that would have FORHP and interested foundations and trusts working together to focus on an agreed upon aspect of rural health.

Specifically, the group chose to align efforts around three major causes of morbidity and mortality in rural America – diabetes, heart disease, and Chronic Obstructive Pulmonary Disease (COPD). A number of foundations expressed interest in participating in the organized collaborative and, after a round of phone calls, ten foundations decided to work together to see if they could move the dial over the next two years.

“Very often the programs and funding opportunities available at the federal level are based on numbers and geared toward urban areas where you have to have a mass, so it’s always been a struggle for rural organizations to get enough support to do projects such as this,” said Cynthia Drennan, Executive Director of Sister’s Health Foundation.

Drennan said one of the trickier parts of the partnership was agreeing on priority areas that would work for multiple foundations and the federal government. Through joint phone calls and a voting process, the parties worked together to narrow down which health conditions would be of focus and decided to tie activities and funding to a care coordination aspect.

Foundations then had to determine how they would be involved. A number of options were given: provide supplemental funding to applicants who didn’t receive funding from FORHP, release a parallel funding opportunity with similar program specifications, or provide technical assistance to grantees who were located in corresponding geographic locations.

We’re really just at the beginning of the process and we have quite a ways to go. There are a lot of unknowns and it will be exciting to see what happens. The projects have the potential to make a real impact in our area.

After the funding priorities and evidence-based metrics were determined, FORHP released the request for proposals for the Care Coordination program. Grant applicants who were located in geographic regions where participating foundations work could also choose to submit their applications directly to those funders.

“We’re really just at the beginning of the process and we have quite a ways to go,” said Drennan. “There are a lot of unknowns and it will be exciting to see what happens. The projects have the potential to make a real impact in our area.”

At the third annual meeting in May, participants discussed some of the greatest unmet health needs in rural areas. After deciding on key issues, attendees broke out into small groups and brainstormed about how the Collaboration could work to make a change related the selected priority areas.

Karen McNeil-Miller of the Kate B. Reynolds Foundation leads the group in a discussion about next steps for the Collaboration.

On the last day of the meeting, participants convened and each group had the chance to make a case for why their priority area should be chosen as the next area of collaboration. After a voting process, it was determined to pursue the topic of health equity through cross-sector leadership development.

Moving forward, conversations will begin to unfold surrounding the development of rural leaders who will work to address the social determinants of health: prevention, transportation, economic development, education, early childhood development, and access to care.

“It’s great that this topic came out of their conversations,” said Rafiullah. “Now we can work on what we can do together.”

Commitment from foundations and federal agencies will play a key role in addressing health equity through leadership, and other national organizations are also committed to helping the cause.

GIH will work to raise the visibility of rural health grant making opportunities and promote informal conversations in order to keep the momentum going. Additionally, NRHA will be working to prioritize health equity and will engage private funders in discussions of recruitment, policy development, and rural health improvement in their annual leadership conference.

With broad-based support and a unique set of partners, the Rural Health Philanthropy group will continue to work toward promoting access to quality healthcare in rural areas.