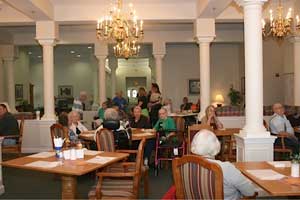 Residents at an Assisted Living Facility, built by River-to-River Residential Corporation in rural Illinois, enjoy gathering for a special meal.

Meeting housing needs in rural areas—particularly for special populations like the elderly and disabled—has been an ongoing challenge, especially in the last decade or so.

“Far too many rural residents have struggled with housing problems and inadequacies for years, if not decades, before the national housing crisis hit,” said Leslie Strauss, a Senior Policy Analyst with the Housing Assistance Council (HAC), a national nonprofit corporation dedicated to improving housing conditions for the rural poor in the United States. “Many high poverty regions and populations are located in rural communities across the nation. Often forgotten or hidden from much of mainstream America, these communities continue to experience decades of economic distress, neglect, and poor housing conditions.”

Yet, throughout rural America, there are ongoing success stories that demonstrate what can happen when community leaders band together to meet demonstrated housing needs in their regions.

The following organizations, featured in past issues of the Rural Monitor, continue to address the housing needs of their various populations by adapting and growing their services. In Kansas, Interfaith Housing Services and New Beginnings (featured in the Winter 2010 Rural Monitor, no longer available online) continue to collaborate in the provision of services such as temporary and transitional shelter, permanent housing, financial education and job training for people in need. In Illinois, River-to-River Residential Corporation still builds and staffs affordable assisted living facilities (cover story, Summer 2009, no longer available online) that make it possible for rural seniors to remain in their communities when they can no longer live independently.

Local, non-profit organizations provide much of the housing assistance in rural areas throughout the nation, Strauss said. In Hutchinson, Kan., Scott and Eric Saunders are benefiting from that type of assistance. Last March, they moved into a new fully accessible, ADA-compliant duplex after Interfaith Housing & Community Services (IHS) came to their rescue. The brothers, who both suffer from a degenerative neurological disorder, couldn’t afford housing that accommodated their physical disabilities. IHS secured grant funds from the Kansas Housing Resource Corporation (KHRC) and used students in the Hutchinson Community College building trades program to provide volunteer labor.

IHS is a faith-based, nondenominational nonprofit based out of Hutchinson with various programs covering one-half the state of Kansas. New Beginnings is a nonprofit that serves mainly the Hutchinson area. In addition to addressing housing needs, both nonprofits address underlying reasons that contribute to housing crises by offering education and incentives related to improving financial status through job training, post secondary education and responsible money management.

KHRC named IHS its “Outstanding Housing Advocate” in 2011 in recognition of IHS’ Creating Assets Savings & Hope (CASH) Program. CASH provides financial education and life-skills training for up to 200 clients annually. They must commit to attending the classes and regularly depositing money in a savings account for at least six months. Once clients meet requirements, IHS begins matching $2 for every $1 deposit. Accumulated savings can be used toward agreed-upon lifestyle improvement goals, such as home ownership and postsecondary education or job training.

In an effort to break the cycle of generational poverty, IHS has also begun sponsoring workshops that teach children about responsible spending and saving. While children are in class, parents meet separately with instructors who try to help parents break the cycle of living from paycheck to paycheck.

Because IHS is dependent on volunteers for its labor pool, local donors contributed to rehabilitation of a house that is being used to provide temporary living quarters for up to 15 volunteers at a time. In addition to local volunteers, skilled laborers from various church denominations throughout the United States travel to Hutchinson for extended periods to work on IHS projects. Having a Volunteer House allows other faith groups to join IHS in its mission of “Christ calling us to serve our neighbors,” said IHS President John Scott.

“Part of the beauty of volunteer labor is that it allows us to keep costs low,” Scott noted. “However, that purpose is defeated if extra costs are incurred housing them.”

In 2011, New Beginnings provided shelter to 1,789 homeless or near-homeless people, 604 of them children. Over the last two years, 283 families facing eviction received New Beginnings’ assistance to help them remain in their homes. People between 50-62 are the fastest growing segment in need, according to CEO Shara Gonzales.

“We teach people in poverty how to increase income, pay off back rent and utility bills, and pay back the community as they get on their feet again,” Gonzales said.

Using city, county and state grant funding, New Beginnings has begun a neighborhood stabilization project known as the Anchor Homes Program. New Beginnings purchases deteriorating homes, which volunteers and contractors then rehabilitate. These homes are sold at affordable prices to current and formerly homeless clients whose median income is 50 percent to 80 percent of the average.

Home owners, neighborhoods and volunteers all benefit, according to Gonzales. Homeowners, who complete training as peer counselors, invest in the neighborhood by helping other residents access community resources. Volunteers working on the homes learn job skills that can lead to permanent job placements.

River-to-River Residential Corporation owns and operates assisted living facilities (ALF) that offer affordable rents in rural southern Illinois where the population is largely low-income. In a slight departure from its earlier ALFs, River-to-River has opened two 50-unit supportive ALFs in Marion and Anna, Ill., for seniors who qualify for nursing home care but desire a homelike environment. Because these seniors’ health issues qualify them for nursing home care, they require more assistance than seniors living in the other ALFs. However, the Illinois Medicaid waiver program covers program rent and services because the ALF environment is more cost effective.

The Marion campus is being expanded to include separate housing for residents able to live independently. When necessary, they can choose to access ALF services on campus and/or move into the ALF.

“Our goal is to help seniors stay where they want to be, in the places they’ve lived, worked and raised their families,” Hamlin said. “We work hard to target small communities and build smaller facilities there.”

Looking to the Future

Strauss said that federally funded housing initiatives have declined steadily, and resources and mechanisms for rural assistance are diminishing. If rural housing opportunities are going to improve, she stressed, continued public investment combined with sound policy is critical.

Right now, nonprofit community-centered housing organizations remain the most consistent resources to address rural housing challenges, according to Strauss. As of 2011, HAC had committed $285 million in loans and grants awarded to more than 750 organizations across rural America to support construction or preservation of affordable homes. HAC has also launched recent initiatives to improve housing for low-income seniors and to help rural organizations help veterans.

“Despite capacity and funding limitations, community-based organizations are often the catalysts that transform public and private funding into affordable homes,” Strauss said.