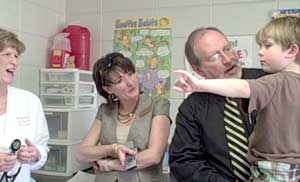 A normal school day for children in Georgia includes healthcare interventions once assumed to be “normal” only in a physician clinic or hospital setting. These Georgia students are being diagnosed and treated at school for complex healthcare issues ranging from behavioral disorders to management of chronic diseases such as asthma and diabetes. Remotely located medical specialists associated with the Global Partnership for Telehealth (GPT) use school telehealth setups to assess and treat students and staff. Schools and jails are among more than 350 Georgia locations where telehealth has replaced the traditional doctor’s office visit.

Today’s telehealth capabilities and outreach were unimaginable just 20 years ago (and have increased dramatically in the last two years, since the Rural Monitor covered “telemedicine” in its Summer 2011 issue, no longer available online). Telehealth services even span continents; in Antarctica, American scientists working at research stations receive medical care from physicians based in Galveston, Texas.

“Where we were and where we are is amazing even to those of us that have been involved from the beginning,” says Dr. Jay Sanders, Global Telemedicine Group CEO and a founding board member of the American Telemedicine Association. “I remember in 1967 when I was a resident at Massachusetts General Hospital and a professor set up a telemedicine link between the hospital and his office. When he suggested it, I thought it was the stupidest idea I’d ever heard. I’ve been working on that stupid idea ever since!”

Now every state has implemented telehealth at some level, according to Sherilyn Pruitt, Director of the Office for the Advancement of Telehealth (OAT) at the Health Resources and Services Administration (HRSA). In addition to Georgia, Pruitt said the states with extensive telehealth networks include Alaska, Arkansas, Arizona, California, Oklahoma, Oregon, Missouri, Montana and Virginia.

Telehealth Proves Itself for Every Age

Early telehealth development efforts quickly revealed unexpected benefits in patient care. Some of those examples, according to Sanders, highlighted the differences in patient health when patients were evaluated outside the traditional clinic or doctor’s office setting. Patients who were clearly documented as hypertensive in the doctor’s office were not hypertensive when their blood pressure was taken at home. Likewise, children who had asthma demonstrated very different pulmonary function results when they breathed air in the doctor’s office versus responding to antigens in home and school environments. 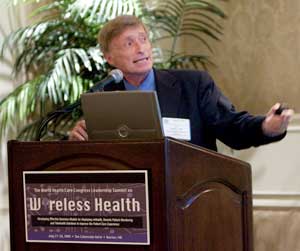 Dr. Jay Sanders, a founding board member of the American Telemedicine Association, says that telehealth has revealed unexpected benefits in patient care.

On the other end of the age spectrum, telehealth is keeping seniors healthier and able to remain in their homes longer. Hospitalization rates decreased by 25 percent for patients enrolled in the FirstHealth Home Care Chronic Disease model in North Carolina, according to results of a three-year study released in April. Patients who had diagnoses of heart failure, diabetes or COPD and had experienced frequent hospitalizations were monitored by telehealth at home between skilled nursing visits. Response and intervention times improved substantially.

“In every measurement outcome—including quality of life, pain, and medication management—the telehealth patients improved more than any other groups,” said Patty Upham, director of FirstHealth Home Care Services. “Telehealth technology is a critical component in a comprehensive approach to chronic disease management.”

“The fundamental reality is that we are starting on the wrong side when we begin treatment after the patient ends up in the hospital,” Sanders asserted. “We need to start with prevention. That’s one of the strengths of telemedicine, particularly in rural areas where resources are limited.”

Certified diabetes educators (CDE) are nonexistent in eastern Washington and northern Idaho where Inland Northwest Health Services, Community Health and Northwest Telehealth partner with rural hospitals in a prevention and education program that offers two-way group video conferencing classes for pre-diabetic individuals. Participants have lowered blood sugar levels and lost weight, greatly reducing their risk of developing Type 2 diabetes. They pay $10 per hour for live video sessions with a CDE; a private consultation would cost about $100 plus expenses associated with traveling two to four hours to the nearest CDE. 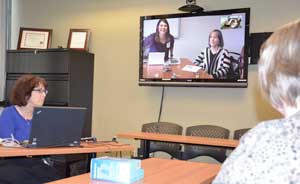 In Sioux Falls, SD, Avel eCare services have grown to include coverage for ICU, emergency departments, pharmacy and long-term care, and now serve more than 165 hospitals and clinics in South Dakota, North Dakota, Iowa, Minnesota, Montana, Nebraska and Wyoming. In the last two years, since it was first covered in the Summer 2011 issue of the Rural Monitor, 27 more rural sites have signed up for Avera eEmergency services, for a total of 87. Avera began its outreach in the 1990s with eConsult, offering two-way physician consultations.

Avera’s eEmergency and ePharmacy are lifesavers at the 24-bed McKenzie County Hospital (MCH) in Watford City, ND, according to MCH CEO Dan Kelly. When it was featured in the Summer 2011 Rural Monitor, MCH had shown a 40 percent increase in ER patients that year; now its ER usage has quadrupled in the last four years, owing mainly to the state’s oil boom. Traumas have gone from “fishing lures in fingers to multiple vehicle accidents,” Kelly said. Last year MCH added ePharmacy after Kelly was unable to recruit a hospital pharmacist.

“In life and death cases where patients come into the emergency room having a stroke or heart attack, there is a window of opportunity time span that greatly impacts the patient’s outcome,” Sanders said. “Instead of taking more time to transfer the patient via ground or air to a larger facility, telehealth puts a remote neurologist or cardiologist right in that rural hospital ER to examine the patient and work directly with hospital staff. Even in non-emergent cases, patients benefit. Many rural patients used to wait several days just to get test results because small hospitals often have no radiologist on staff. Now a radiologist remotely reads and interprets exams. These patients can get answers the same day.”

In Georgia, GPT’s ever-growing statewide network offers people of all ages access to more than 200 health care providers representing 40 specialties. Partnerships with major providers such as Atlanta Children’s Hospital demonstrate the wide scope of services. In the child population alone, there are 16 different telehealth categories, including treatment for acute medical conditions such as nephrology and pulmonology.

“Telehealth is being used effectively and efficiently in any situation that does not require the provider and patient to be in the same place,” asserted Rena Brewer director of the Southeastern TeleHealth Resource Center (SETRC). “For example, a dentist can examine a patient virtually, but he cannot pull or crown a tooth virtually.”

“Telehealth is going to continue to change and evolve how medicine is practiced,” Pruitt said. ” Every category of health care has some type of telehealth component now and growth will continue to explode.”

Brewer predicts that Georgia’s school-based and public health-based initiatives “will prove to be real game changers.” GPT is working with several school districts to launch services at their sites during the next school year. The Georgia Department of Public Health plans to equip every county public health department in the state as telehealth sites. The work is underway; last year, all public health departments were wired for video teleconferencing.

“Being able to tie into these specialists is really valuable,” Kelly commented. “The best telehealth benefit for us in Watford City has been improved patient safety. There’s no doubt that telehealth technology is very important to rural America.”