St. Charles Madras staff realized through employees’ and patients’ feedback that they weren’t doing enough to provide culturally competent care to its American Indian and Latino patients. Some providers said they were worried about how their care might interfere with a patient’s cultural preferences, and patients shared anecdotes of times when healthcare staff treated them with disrespect or a lack of understanding of their cultures.

For example, Chief Nursing Officer Candy Canga-Picar, DNP, shared one nurse’s story of an American Indian patient who had lost her baby during childbirth. The patient and the family were upset to see that the baby had not been wrapped in white cloth, a symbolic color in this family’s culture. The nurse was also surprised when the patient shaved her own head, a sign of grieving. “The whole experience created unnecessary tension between the nurse and the family due to lack of understanding of each other’s culture,” Canga-Picar said.

Canga-Picar was born in the Philippines and immigrated to the United States in the early 1990s to work as a registered nurse. When she was working on her doctorate, she completed a capstone project to promote racial equity in healthcare. Canga-Picar found evidence-based training and education in cultural competency and brought these findings to St. Charles Madras.

The hospital applied for a Small Rural Hospital Improvement Project (SHIP) grant via the Oregon Office of Rural Health to create a pilot project to better serve its American Indian and Latino patients. The project collects feedback from patients and community leaders and uses employee trainings to improve cultural competency.

SHIP awardees are located in 46 states that have qualifying hospitals. About 1,600 hospitals participate each year, and SORHs receive about $12,000 per participating hospital. Hospitals are given the option to pool their funds as a network at the state level or to determine their own projects.

Oregon has 32 SHIP-eligible hospitals, 25 of which are CAHs. Oregon offers a network option, but a majority of the hospitals do not choose it. Rebecca Dobert has been Field Services Program Manager at the Oregon Office of Rural Health since 2016, and she said there’s never been more than a third of the hospitals taking the network option.

Most SHIP hospitals in Oregon like St. Charles Madras complete independent projects. This approach, Dobert said, “does give them the leeway to work with me to design projects that really meet their need.”

Every participating SORH sends reports to HRSA. Salamatu “Sallay” Barrie, a HRSA project officer for the SHIP program, works to see which cohort of her grantees stand out as a promising practice, and that’s where Dobert told her about St. Charles Madras’ work.

Barrie recognized the promising practice in the cultural competency aspect, the evidence-based training, and the story that the data were able to tell about St. Charles’ improved patient satisfaction scores.

At St. Charles Madras, Canga-Picar reached out to the Chief Physician Officer and the Chief Nursing Executive and worked with a local Indian Health Service (IHS) clinic provider and nurse manager who introduced her to leaders from the Confederated Tribes of Warm Springs.

These healthcare staff and tribal leaders served on a panel for a cultural summit, funded by the SHIP grant, held at the local performing arts center. The summit featured a lecture on transcultural care, and the panel discussed American Indian cultures and history as well as ways providers can adjust their care to better align with a patient’s beliefs and traditions.

Establishing trust with the tribal leaders took a while. Our hospital leadership team worked diligently to remain transparent and humble and listened to their concerns.

“Establishing trust with the tribal leaders took a while,” Canga-Picar said. “Our hospital leadership team worked diligently to remain transparent and humble and listened to their concerns.”

Canga-Picar said the number of inpatient providers who completed the initial cultural competency training and education surpassed the goal set at the start of the pilot project. About 110 providers and community members attended the conference.

In addition, the hospital’s nurse leadership and human resources worked together to rewrite nursing job descriptions to include requirements about participating in cultural competency activities. St. Charles Madras also updated its artwork in and around the hospital to better reflect its patient population. For example, the outdoor healing garden has an artistic rendering of a piece of rock art in the Columbia River Gorge called “She Who Watches” along with a sculpture of three salmon, which represent abundance, renewal, fertility, and prosperity. 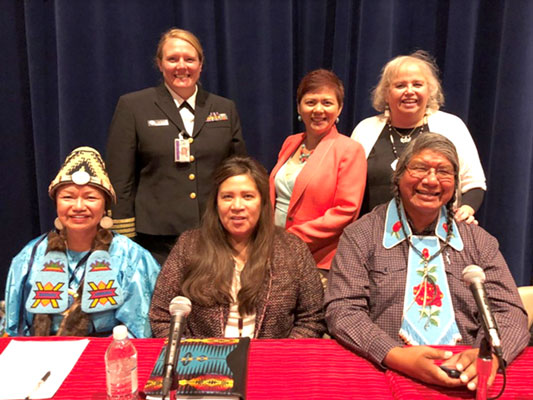 Tribal leaders also participate in the newly formed Patient Family Advisory Council (PFAC), which also includes leaders from the Latino communities. This formal group meets regularly with healthcare providers to weigh in on policy and program decisions. “The PFAC is the voice of our patients and family members to assist the hospital in improving the quality of care,” Canga-Picar said. The PFAC developed five hospital policies around cultural considerations for American Indian patients.

“I loved that Candy and St. Charles really took the intent of the program and applied it to help quantify and ameliorate a gap in the quality of care being provided to a significant portion of their patient demographic. It was a simple, evidence-based approach that accomplished quite a complex task.

“I loved that Candy and St. Charles really took the intent of the program and applied it to help quantify and ameliorate a gap in the quality of care being provided to a significant portion of their patient demographic,” Dobert of the Oregon SORH said. “It was a simple, evidence-based approach that accomplished quite a complex task.”

The PFAC also advised the hospital to switch from a mailed patient satisfaction survey to a telephone survey, as many community members in the service area would rather share their opinions and experiences verbally instead of in writing. Hospital staffers have already seen an increase in the number of people who respond to their surveys, from a small number of people to around 25 per fiscal quarter.

Dobert remembers Canga-Picar saying that community members told her this pilot project was the first time anyone had not only asked for their input but then made changes based on that feedback. “I don’t think the value of that can be overstated ever. It’s also far past time,” Dobert said.

Dobert added, “If we don’t get the answers from the people we’re serving, we don’t know how to serve them.” She sees this attention to patients’ feedback as a crucial part of St. Charles Madras’ work: “Starting with attaining a simple, genuine assessment of where the hospital was not meeting the needs of a patient population, they have been able to have significant impacts across the facility and beyond.”

It’s not just patients appreciating St. Charles Madras’ work. A health equity council in central Oregon reached out to Canga-Picar to learn more about her pilot project, and the Oregon Medical Board asked for a presentation about this work. The Oregon Office of Rural Health asked Canga-Picar about replicating this project throughout the state. In 2019, Canga-Picar received the Transformational Pioneer Award from the Northwest Organization of Nurse Leaders; she was nominated by her administrator.

Dobert said her state has many highly engaged SHIP awardees, but St. Charles Madras’ “work was a standout from the beginning” and demonstrates “the quintessential value of SHIP.”

It’s being able to promote patient advocacy and empowerment…It’s not just somebody coming in and saying, ‘This is what we need to do.’ It’s making sure that community is part of that process

Barrie noted how the hospital brought together tribal leaders and healthcare providers to develop new policies and programs. “It’s being able to promote patient advocacy and empowerment…It’s not just somebody coming in and saying, ‘This is what we need to do.’ It’s making sure that community is part of that process,” Barrie said.