When the Inter Island Medical Center (IIMC) Telepsychiatry Project appeared as an Around the Country feature in the Fall 2010 issue of the Rural Monitor (no longer available online), the project was near the end of its grant cycle. But IIMC, a rural health clinic on San Juan Island in Washington State, was hoping to keep the telepsychiatry project going with additional funds. Since that time, IIMC has become PeaceHealth Peace Island Medical Center, a Critical Access Hospital (CAH) in Friday Harbor, Wash.

The new Peace Island Medical Center features local art throughout the building, including this sun carving in its lobby. 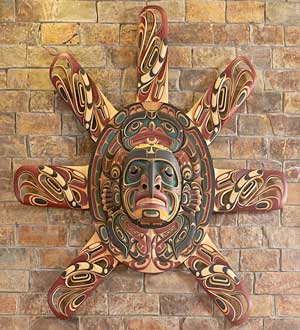 “The new facility is a place of healing and gathering that strongly reflects the unique culture of the San Juan Islands,” said Carrie Unpingco (who was the IIMC Telepsychiatry Project Coordinator and now works as Administrative Assistant at the new center). The facility features natural light and, through a public-private partnership, local art throughout its rooms including a medical heritage wall mural, art glass entry doors and a Native American carving above its entry fireplace.  The American Institute of Architects Healthcare Design Award was given to the facility in 2013.

Between the closing of IIMC and the opening of the CAH, there was more than a one-year gap in telepsychiatry services, according to Beth Williams-Gieger, director of Administrative Services at Peace Island Medical Center. Williams-Gieger said that the new facility has been awarded a four-year HRSA Office of Advancement of Telemedicine grant to continue to provide outpatient telepsychiatry services and to build a rural telehealth network in northwest Washington and southeast Alaska. The facility is in the very early stages of building its network and building staff services in the hospital in-patient setting. It has contracted with the University of Washington Department of Psychiatry to provide psychiatry consultations to patients in San Juan County where no psychiatry practice is available.

“The outpatient medical management provided by the psychiatrist is a great collaboration with our primary care providers in our county,” Williams-Gieger said.  “Primary care providers refer patients in need, and we have a virtual clinic every Friday at our new facility. Patients have really appreciated not having to travel out of San Juan County for this service.  It allows patients to take an hour off work rather than the whole day to travel to the mainland.”