The Centers for Disease Control and Prevention (CDC) is highlighting rural health issues with a special series of its Morbidity and Mortality Weekly Report (MMWR). The first data report in the MMWR Rural Health Series, on leading causes of death in metropolitan and nonmetropolitan areas, was issued January 13th, and the second, on health-related behaviors by urban-rural county classification, was issued February 3rd. 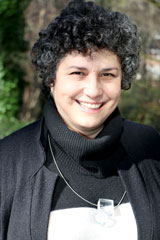 “The purpose of this series is to put a focus on CDC’s rural health activities — I believe it’s the first series that CDC has ever done like this,” said Robin Wagner, Chief Science Officer for the Office of Public Health Scientific Services at the CDC, and the series editor. “I think we’re making a significant contribution to understanding not only health in rural areas, but also the interventions that might be needed to address those health concerns and problems.”

The series will run throughout 2017. Wagner said that other topics in the series may address chronic diseases, healthy behaviors, reproductive health, injuries and exposures, and agriculture safety and health. In all, more than a dozen papers are planned, Wagner said, along with an epilogue that will summarize the year, scheduled to be published in December.

The Federal Office of Rural Health Policy (FORHP) is providing assistance with the series. FORHP, located within the Health Resources and Services Administration, is charged with advising the Secretary of the U.S. Department of Health and Human Services on healthcare issues impacting rural communities. The reports provide much-needed information, according to Curt Mueller, Director of Research and Evaluation at FORHP. 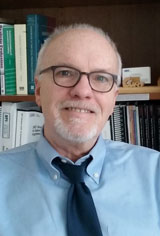 “Rural data are very important to our office, but we often lack good representative data on rural and urban areas so that we can make these comparisons,” Mueller said. “We use these data in support of our mandate to provide objective information, and to inform our analyses on various policies that will impact rural America.” Mueller added that the FORHP-funded Rural Health Research Centers have touched on many of these research topics, and that CDC is now bringing an increased national focus to the importance and value of rural data. “We welcome CDC’s efforts to provide these kinds of data cuts, both for ourselves and for many of our stakeholders,” he said.

Wagner said that the reports will draw on a variety of sources, using various definitions for non-urban data. “The papers don’t use the same methods for each of the analyses, because there are a number of different, legitimate ways of classifying geography that way,” she said. “It’s not strictly the two terms, of rural and urban — the classification is based on several different methods, including using Census data, with different sub-categories of urbanization. We do national surveys at the CDC — we have the National Health Interview Survey, the Behavioral Risk Factor Surveillance Survey, and so forth. To the degree that the respondents can be geocoded into rural versus urban settings — that’s one of the ways that we’ve been doing this.”

The MMWR Rural Health Series was the idea of Dr. Thomas Frieden, the former director of the CDC, Wagner said. “He asked the Center leaders to see what type of programs they had in rural health,” she said. “So it really reflects the wide range of rural health activities that go on throughout CDC. Many Centers contributed, so the topics are broad — just like our Centers.” For example, the authors of the first report were affiliated with CDC’s National Center for Health Statistics; Center for Surveillance, Epidemiology, and Laboratory Services; National Center for Injury Prevention and Control; and National Center for Chronic Disease Prevention and Health Promotion.

The first report was issued as a data article (Leading Causes of Death in Nonmetropolitan and Metropolitan Areas — United States, 1999–2014), paired with a commentary article (Reducing Potentially Excess Deaths from the Five Leading Causes of Death in the Rural United States), which talked about the meaning and the impact of the findings. An interactive Data Visualization Gallery website accompanied the report, which gives users the option of graphing data on potentially excess and expected deaths by disease, state, and locality, among other options. 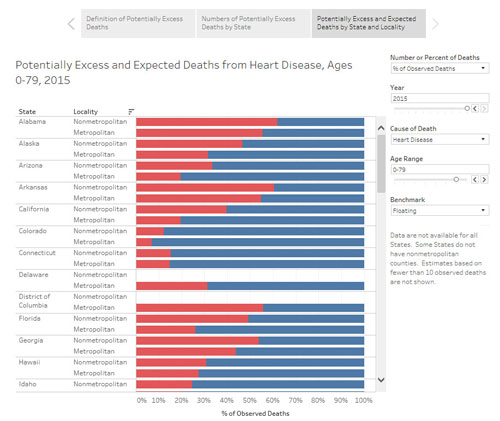 Additionally, the Rural Health Information Hub will be hosting a series of webinars, in collaboration with FORHP and CDC, to highlight some of the forthcoming reports throughout the year. The first webinar will be held Wednesday March 1, 2017 at 11:00 a.m. Eastern and will discuss the research findings and recommendations related to potentially preventable deaths in rural areas.

We’re thrilled that we will be able to make a contribution to the scientific literature, but also that we’re elucidating the relationships between risk factors and diseases, injuries, and death in rural settings compared to those in urban areas in the United States.

“We’re thrilled that we will be able to make a contribution to the scientific literature, but also that we’re elucidating the relationships between risk factors and diseases, injuries, and death in rural settings compared to those in urban areas in the United States,” Wagner said.