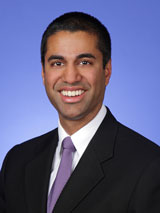 Federal Communications Commissioner Ajit Pai was sworn into his position on May 14, 2012 after being nominated by President Barack Obama and unanimously confirmed by the United States Senate. His focus as Commissioner is to create a regulatory environment in which competition and innovation will flourish to the benefit of American consumers.

Commissioner Pai came into his role with experience in communications, law, and policy. Between 2007 and 2011, Commissioner Pai held several positions in the Federal Communications Commission Office of General Counsel, including Deputy General Counsel. His prior work also included posts with the Justice Department, the Senate Judiciary Committee, and in private industry. He earned a B.A. degree from Harvard as well as a J.D. from the University of Chicago.

The son of immigrants from India, Commissioner Pai grew up in Parsons, Kansas. In September 2015, he released a statement supporting the expansion of broadband deployment in rural areas.

What are the main purposes of the Federal Communications Commission (FCC)? How is it structured?

The FCC is led by five Commissioners, each of whom is nominated by the President and confirmed by the U.S. Senate. Each serves a term of five years, and the President designates one to be the Chairman. The five commissioners set communications policy for the entire country—everything from telephone service to satellite communications to cable regulation. Because the issues are complex and numerous enough, they also delegate work to several bureaus and offices within the Commission.

In September 2015, you issued a statement regarding the importance of expanding deployment of broadband in rural areas. Why do you feel that it’s important?

My goal is to ensure that every American—especially those in rural America—enjoys the full bounty of opportunities that broadband provides.

My goal is to ensure that every American—especially those in rural America—enjoys the full bounty of opportunities that broadband provides. Increasingly, the digital divide in this country is between urban Americans, who can choose from multiple high-speed Internet providers, and rural Americans, who have fewer choices and generally must pay more for slower service. And there’s no telling what rural Americans can achieve with a broadband connection. Broadband is the 21st century platform for entrepreneurship, it offers access to healthcare rural Americans might never otherwise receive, it lets them educate their kids through distance learning, and it connects them with friends and family around the world in ways that weren’t possible in the analog age.

How will increasing broadband availability improve the ability of rural healthcare organizations to provide quality and efficient care for their patients?

That’s a great question. My own father is a physician in rural Kansas, and I remember him heading out in his car to visit the small towns that lay 40 miles or more from home. When he was there, he could provide care for people who would otherwise never see a specialist at all. I sometimes wonder, back in the 1970s and 1980s, how much easier it would have been on patients, and him, if broadband had been available so he could provide healthcare online.

Healthcare is a powerful example of what broadband can do: it can reduce costs, increase access, and ultimately improve healthcare outcomes.

Today, I’ve seen what a difference broadband can make to a small community. I’ve seen how broadband lets hospitals connect with patients that are many miles away and give them the same quality of care as if they were in the hospital. Healthcare is a powerful example of what broadband can do: it can reduce costs, increase access, and ultimately improve healthcare outcomes. Once distance is no longer a factor in healthcare, everybody is really on a level playing field.

How does rural healthcare compare to urban healthcare in regards to access and ease of broadband and technology usage? How can the FCC help to close the gap on the differences?

I’ve traveled extensively throughout rural America, and I can tell you that I hear from citizens and providers alike that broadband isn’t sufficiently deployed yet. That’s why my priority is to make broadband ubiquitous so that everyone can benefit from it, including its healthcare applications.

Do you view convenient access to communications and information technology as a social determinant of health? How does the lack of access in some rural areas impact the ability of rural citizens to lead healthy lives?

An Internet connection can let someone learn, for example, what’s the right diet for someone with diabetes or how much and what kind of exercise do I need to do to stay healthy. It is information that might not always be available in hardcopy in your area. But the world is your oyster with a broadband connection.

What role can the FCC play in improving communications capability for rural Emergency Medical Services?

Encouraging the robust deployment of broadband everywhere should really be a priority for us at the FCC. I remember a visit I paid to a small town in rural Alaska called Fort Yukon in 2013. There, I visited a healthcare facility that was able to provide service to Alaska Native villagers who might not have access to any healthcare whatsoever; in some of the most remote areas, there aren’t even roads, let alone broadband. A broadband connection can be a lifeline for them—letting them call in a Medevac, for example, during a health emergency.

What motivates you to ensure equity for rural communities related to communications technologies?

Part of it is personal. I grew up in a small town called Parsons, Kansas. Its population is 11,514, and it’s nestled in southeast Kansas, three hours south of Kansas City, two hours from Wichita, and two hours from Tulsa. A lot of people from the coasts might consider it far away from civilization, but it was a wonderful place to grow up. I’m worried, though, because we’re seeing across rural America that young people are leaving for larger cities like Washington, DC because they don’t perceive that they’ll have the same digital opportunities in rural towns. If the next generation leaves these towns, well, that’s a shame—they’ll miss out on the sense of community you get in a small town, and there are still so many good things happening in rural America.

From my professional standpoint, embedded in the very first sentence of the Communications Act is a promise that FCC help make available for all Americans, the most rapid, efficient, nationwide communications network possible.

From my professional standpoint, embedded in the very first sentence of the Communications Act is a promise that FCC help make available for all Americans, the most rapid, efficient, nationwide communications network possible. And I want to extend that promise so that every American, whether in Washington, DC or Parsons, Kansas, can embrace that opportunity.

What do you consider to be some of the main accomplishments of the FCC during your time as Commissioner?

One is highlighting the importance of the Internet Protocol Transition. As our country has moved from the old copper networks of Ma Bell to the increasingly competitive world of wireless communications and fiber, it’s important that the FCC review and update its rules to make sure companies—and ultimately consumers—aren’t forced to pay for legacy networks they haven’t kept pace with technology.

I’ve also pushed to ease deployment for new technologies and especially wireless infrastructure. We’re becoming a mobile world, and the FCC has cleared away some of the regulatory barriers to deployment, and that’s a good thing.

But there’s so much more to do. We need to get more spectrum out in the market to match consumer demand. We need to make rural broadband a priority this year, and I’ve put a plan on the table to do just that. And we need to rethink our E-Rate program; that’s supposed to help schools and libraries access next-generation technologies but has left many—especially rural institutions—buried in reams of paperwork.

I am quite aware that good ideas come from every part of the country, so I want to invite everyone to share their ideas with me. You can find me on Twitter at @AjitPaiFCC or you can email me at ajit.pai@fcc.gov.