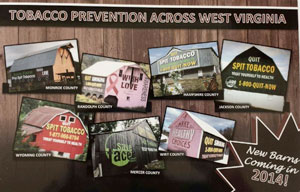 In the years prior to 2008, McDowell County, located in southwestern West Virginia, had high rates of tobacco use attributed to several causes: lack of prevention and cessation services, and a deeply-entrenched rural culture that viewed sports and hunting as synonymous with smokeless tobacco use.

No longer active, the program continues to be a model for other programs looking for cessation efforts that can be part of an overall tobacco control effort in two ways: helping young people to never start using tobacco and helping established users quit.

The original grant-funded project had 2 main goals: to increase access to smokeless tobacco prevention and cessation services, and to increase tobacco-free workplaces and recreational venues.

To achieve these goals, Spit It Out:

Because of the Spit It Out program:

Because of the Spit It Out program, further research has been done regarding the involvement of Extension Services in county-level tobacco control.

Read more in "Perceptions of the Role of West Virginia's Cooperative Extension Service in Tobacco Control Coalitions" published in Frontiers in Public Health.

While the Spit It Out project was tailored to McDowell County's hunting, gaming, and coal mining community, other organizations can replicate it by targeting the social norms and cultural traditions of their residents.

This program was successful in reaching the most disadvantaged residents of McDowell County by partnering with local faith-based organizations. By reaching out to church representatives, the program was able to have an impact on a large number of people who may not have otherwise received services. This aspect was considered a cornerstone of the project and played a large part in its success.

Efforts are strengthened when demonstrating that tobacco cessation can make an immediate positive impact on participants' families, as well as tobacco users themselves.