The Communities That Care Coalition (CTC) of Massachusetts's predominately rural areas of Franklin County and the North Quabbin Region began out of a concern for their area's youth. In 2002, a group of community members gathered to discuss effective ways to address substance abuse that had become prevalent among teenagers. Since then, concerned youth, parents, schools, community agencies, and local governments have united to promote the health of young people by combating substance abuse through CTC.

The Coalition is based on the national Communities That CareTM model, an evidence-based, prevention initiative that builds community capacity to implement evidence-based programs, policies, and practices. Their model was designed to be replicated on a local level.

CTC operates through a Collective Impact Model, engaging with community agencies to work toward preventing harmful behaviors and promoting positive youth development through these work groups:

In 2002, a federal Drug Free Communities grant, distributed by the Substance Abuse and Mental Health Services Administration, provided the initial funds to run the program for several years. In addition, CTC has raised more than $5 million over the last 13 years toward the program's efforts.

This video explains more about CTC Franklin County and the North Quabbin Region.

The CTC system is data-driven and evidence-based and uses information collected about local youth to identify areas of need and measure the program's success. In 2003, they conducted a Teen Health Survey to evaluate high school students' risky behaviors and underlying risk factors. Since then, annual surveys as well as periodic interviews and focus groups have helped guide CTC's efforts.

The Coalition publishes and maintains a Community Action Plan for reducing youth substance use and improving youth health in the region. The plan is updated regularly by the coalition's workgroups based on updated local data and community input.

The Coalition also works to support Screening, Brief Intervention, and Referral to Treatment (SBIRT) for all students in all of their school districts. They work with local schools to help ensure that school policies related to substance use follow best practices and principles of restorative justice.

Marketing is a large part of CTC's efforts. The Coalition works with school districts to coordinate a student-led campaign to promote healthy behaviors. Billboards, PSAs, advertisements, materials, and events have helped shed light on the harmful results of substance abuse. For instance, youth partner with alcohol vendors for a "Sticker Shock" campaign, using messages on stickers to encourage parents to help prevent underage drinking. 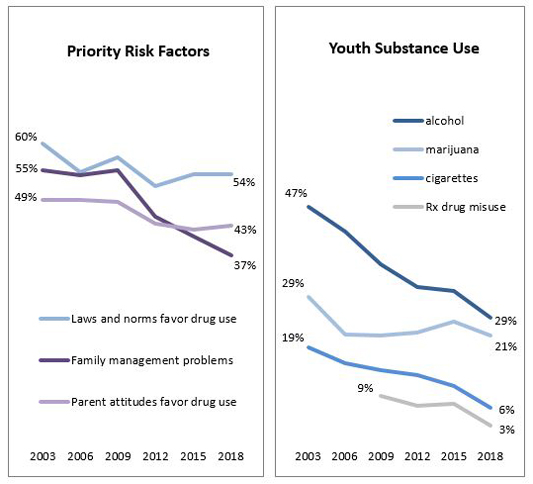 From October, 2015 through January, 2016, CTC completed a set of interviews and focus groups as part of a community assessment on youth substance abuse. Findings were compiled into a report. Students made videos that include personal testimony of the impact of substance abuse in their schools.

The Coalition has advocated for change on a local and national level and has received recognition for its innovation and accomplishments:

Finding and sustaining funding in a low-income rural community has consistently been the greatest challenge for the Coalition, particularly as federal dollars have faded. CTC handled this challenge by including improving youth nutrition and physical activity. Now, the challenge is to maintain the Coalition's focus while working on multiple related issues.

CTC has become a mentor site to sister coalitions across the state. Below are some principles they suggest for those who are interested in starting something similar: