In northeast Kentucky, almost half of the counties are considered Health Professional Shortage Areas (HPSAs) for primary medical care. In addition to low numbers of its students applying to medical school, the region has seen less than 30% of its applicants accepted into an in-state medical program.

Through STEPS, the NE KY AHEC partners with the three medical schools in Kentucky, which provide annual county-level data on applicants and matriculants. From 2013 to 2017, STEPS was almost entirely self-funded by the NE KY AHEC.

Pre-medical students attending college in northeast Kentucky or with a permanent address in the region are encouraged to apply for the STEPS program. Interested students must complete the following:

From 2013 to 2017, an average of 10 applicants were selected each year. After STEPS received a state contract, the number of participants per year was increased to 15 in 2018-19 and the number of applicants was 21 for the 2019-20 cohort. Once accepted into the STEPS program, participants attend about 6 in-person meetings, take an online Medical College Admission Test (MCAT) preparatory course, and receive:

From 2013 to 2015, a total of 28 students participated in STEPS, 25 of whom met all program requirements. Of these 25 participants, 22 were accepted by a medical school (21 to schools in Kentucky and one to West Virginia); this success rate of 88% exceeded the program's original goal of 70%. 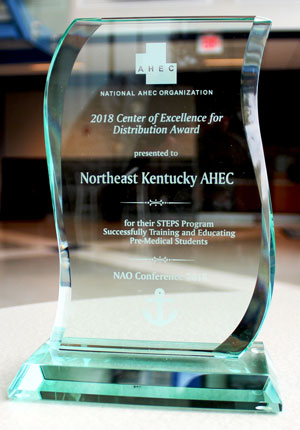 There were 12 participants in STEPS' 2017-18 cohort. Of this group, 11 participants matriculated to a Kentucky medical school in fall 2019.

As further evidence of STEPS' success, the NE KY AHEC has received a two-year contract (July 2018-June 2020) from the Kentucky Primary Care Office to replicate various aspects of the program among the state's seven other regional AHECs, most of which had no prior pre-med programming. After participating in 2018-19, the Northwest Kentucky AHEC started its own pre-med prep program for the 2019-20 academic year.

Due to the success of STEPS, the NE KY AHEC also was presented with the Center of Excellence for Distribution Award at the National AHEC Organization's 2018 conference. The award recognizes an AHEC program that is improving healthcare workforce distribution throughout the nation, particularly among rural and underserved areas and populations.

STEPS coordinators initially had difficulty filling the slots each year with students only from northeast Kentucky, so they have accepted some students from the regional university who live in other areas. This was not the case in 2017, however, so program coordinators are hopeful that word of mouth about the program's successes has begun to spread to all pre-medicine students, including a higher proportion of those who are originally from northeast Kentucky.

In addition to rolling out the program content, the NE KY AHEC is assisting the other Kentucky AHECs with tracking applicant and matriculant data by county or medical school. This type of data collection can help AHECs determine which counties have the fewest applicants and, in response, target their efforts to encourage more students from underrepresented counties to pursue medical careers.

The NE KY AHEC also offers the Summer Health Internship Program (SHIP), which places students in six-week paid internships in local health organizations. This program helps students gain experience in the healthcare field and encourages them to work in the region after graduation. To date, all students (approximately 15) who have completed both STEPS and SHIP have matriculated to a Kentucky medical school.