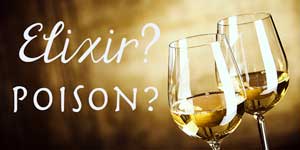 Almost universally alcohol is a legal substance that serves as the cultural beverage used for celebration — and commiseration — for those living in rural and urban areas alike. It’s also a legal and non-prescription substance that impacts health in many ways. As a cancer-causing agent on the same list as asbestos, alcoholic beverages are linked to innumerable malignancies in many organ systems. In addition to cancer, alcohol has a detrimental impact on the heart, stomach, pancreas, and liver. Yet, alcohol has also been found to have health benefits. Dr. James O’Keefe, a preventive cardiologist at Saint Luke’s Mid America Heart Institute in Kansas City and Professor of Medicine at the University of Missouri-Kansas City, has been sorting through these mixed messages with updates in academic review papers in 2007, 2014, and 2018.

O’Keefe shared that alcohol use has been referred to using phrases like “Dose makes the poison or the elixir.” He said he thinks of it as a “sharp, double-edged sword,” a title description he used in the 2007 paper with specific reference to cardiovascular health.

Growing up in a rural area in a largely rural state, O’Keefe said his interest in the positive and negative impacts of alcohol began very early as he observed the alcohol use patterns in his own family. Of French and Irish descent — cultures where alcohol consumption is embraced — several family members had chronic misuse, but others who consumed regular small amounts lived to be near or exceed one hundred years of age. 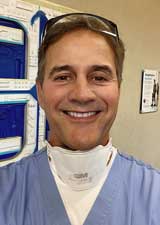 “I used to be more glib about drinking because studies suggested that people who consume alcohol at not more than seven drinks a week for women and 14 drinks a week for men tend to have a life expectancy higher than the general population,” a pattern similar to what he saw in his own family. “This is mostly due to lower risks of cardiovascular events, like heart attacks. But for people who drink more than that, the outcome is not positive, with studies showing that at higher doses, it’s toxic — and not just toxic from a health standpoint but from a mental health and a social standpoint and a lot of associated social strife.”

As a cardiologist, O’Keefe identified his passion as prevention, which is key to improving cardiovascular health. Despite evidence for the protective cardiovascular effects of small amounts of alcohol, he said he more commonly sees the medical conditions caused by the toxic effects of periodic misuse and chronic overuse: atrial fibrillation, a fast, irregular heart rate; chronic high blood pressure and episodes of acute elevation; alcoholic cardiomyopathy, a condition that can lead to heart failure; strokes, blood clots, and premature aging of the body’s arteries.

Alcohol’s Relationship to Cancer and Other Health Conditions

Experts point out that because of the prevalence of alcohol use disorder (AUD) in rural areas, its role in relationship to cardiovascular disease and cancer cannot be ignored, especially with the findings of a recent Centers for Disease Control and Prevention study (CDC) reviewing 2010-2017 data. The study found that the urban-rural gap of potentially excess deaths has increased for three causes of death: heart disease, cancer, and chronic lower respiratory diseases.

What is Alcohol Use Disorder?

The American Psychiatric Association Committee on Nomenclature and Statistics publishes the Diagnostic and Statistical Manual of Mental Disorders, a manual that “defines and classifies mental disorders in order to improve diagnoses, treatment, and research.” The current fifth edition, commonly known as DSM-5, lists 11 criteria for AUD. Depending on the number of criteria met, the condition is further classified as mild, moderate, or severe.


O’Keefe’s review papers have also included information on studies related to alcohol consumption and cancer. In recent years, he said there are more studies uncovering data that suggest even moderate alcohol consumption — one drink per day for women and up to two drinks per day for men — is linked to the increased occurrence of some cancers, like breast cancer in women.

Alcohol and Its Link to Breast Cancer

The CDC provides information on the connection between alcohol and breast cancer in this 45-second video:

Because alcohol misuse is often paired with tobacco misuse — and tobacco is another well-known carcinogen — cancers of the head, neck, and bladder are also seen more often in those who both smoke and consume alcohol. The American Cancer Society (ACS) lists seven cancers where the link to alcohol is strong, including breast cancer, again emphasizing that it’s not the type of alcoholic beverage — beer, wine, or distilled spirits — but the amount of alcohol in those beverages that increases cancer risks. Researchers are also looking into alcohol consumption issues related to cancer survivorship.

In addition to cardiovascular and cancer consequences, O’Keefe said there are many studies that clearly demonstrate alcohol’s adverse impact on other organs. For example: alcoholic liver disease with its multiple consequences such as esophageal varices, which can lead to sudden massive hemorrhage or conditions like life-threatening inflammation of the pancreas, referred to as pancreatitis.

Assessing Alcohol Use: Amount and Frequency

“I never touch the hard stuff, Doc,” is an explanation patients offer their clinicians as a description — or a defense — of their pattern or habit of alcohol use. Experts say it’s important for clinicians to educate their patients that no alcoholic beverage is less harmful than another.

Several federal agencies that focus on alcohol misuse provide specific definitions for use patterns that are based on “one standard drink” along with the pattern of consumption over time.

One standard drink is defined by the percentage of alcohol in the drink, not by type of beverage: one 12 oz. bottle of beer is equal to one 5 oz. glass of wine and also to 1 jigger or shot of 80-proof distilled spirits, such as vodka, whiskey, gin, or rum. All these sizes contain the same amount of alcohol: 14 grams. 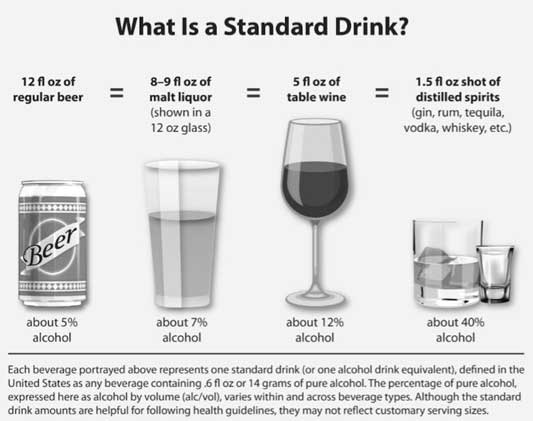 Experts suggest that clinicians also determine how a patient is self-defining their use. For example, whether “one drink” is one bottle of beer or one six-pack of beer or one glass of wine or one bottle of wine. The Substance Abuse and Mental Health Services Administration (SAMHSA) defines heavy drinking as 8 or more drinks over a week’s time for women; for men, 15 drinks or more in one week. Binge drinking is defined by more than 4 drinks for women and 5 drinks for men at one sitting or over a timespan of one or two hours.

A quick assessment of patients’ alcohol consumption pattern can be made by using the National Institute on Drug Abuse Quick Screen, a 1-question option for screening: How many times in the past year have you had four or more drinks in a day?

Experts like O’Keefe are keeping their eye on more research concerning the periodic misuse of alcohol, or binge drinking. With a special prevention program targeting alcohol misuse, the CDC says that binge drinking “is the most common, costly, and deadly pattern of excessive alcohol use in the United States.”

Though not rural-specific — yet perhaps important for rural-focused efforts due to the large number of older adults in rural areas — a 2017 study found that between 2001 and 2012, Americans age 65 or older increased their alcohol consumption by over 20%. Another recent study also found an increase in binge drinking in older adults.

Where rurality has been specifically analyzed is in a younger population: college students. A survey of nearly 450 students at a public university in the southeast showed that though rural students were less likely to use alcohol at college entry, that gap closed by the junior year, where consumption patterns were similar.

And Then There’s “The Conversation”

Because clinicians are aware of the “deadly nature” of alcohol, O’Keefe maintains it’s their duty to discuss alcohol misuse, especially when the signs and symptoms present. He admitted that these conversations are sensitive and difficult, and he credits his mandatory psychiatry rotation during his residency for giving him an opportunity to learn about those topics. He said he specifically chose the drug and alcohol dependency unit, where he received “some of the most practical and useful knowledge that I gained during my training, because these are such common problems that it’s really helpful to have some training and background in that specialty.”

“As physicians, we have an opportunity to influence behavior, much more so than others in a patient’s life who might say the same thing,” he said. “I often use this approach with some patients: ‘Alcohol consumption is privilege. If you can’t do it in a responsible way with respect to your health, then you should not indulge in that particular privilege.’ When you see the results of alcohol misuse, it’s a teachable moment. ‘This drinking is really bad for you. It’s affecting your health. This could kill you if you keep it up.’ It’s just really important for physicians to talk to their patients when they see a problem and encourage them to get assistance.”

With the efforts involved in producing the review papers in addition to his clinical experience, O’Keefe said he feels confident about their final recommendation in the 2018 paper: Healthcare providers should not advise nondrinkers to begin drinking. Problem drinkers should be advised to abstain permanently and seek professional help to attain this.

“I’m an experienced physician practicing now for almost 40 years,” he said. “I feel like I have a very well-informed and objective opinion on a topic that a lot of people have a hard time being objective about.”