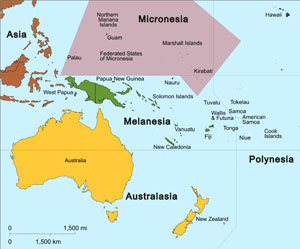 Located northeast of Papua New Guinea in the Pacific Ocean, the Federated States of Micronesia (FSM), a U.S.-associated grouping of islands, consists of four states – Chuuk being one of them. Although there is only one state hospital for the 50,000 residents that inhabit Chuuk, a group of women is making a difference for the state’s healthcare system and for Chuuk society as a whole.

The Chuuk Women’s Council (CWC) was established in 1984 by some well-respected women who had a desire to educate other women to become leaders in their communities, businesses, and in healthcare. With the slogan “women working together to make a healthier and safer Chuuk for everyone,” the council has united many organizations with similar missions to make a larger impact. Their primary method is through education, encompassing issues such as health, education, environmental conservation, and the preservation of Chuuk tradition.

CWC’s current president, Christina “Kiki” Stinnett, has strong familial ties to the council as her mother, Shinobu M. Poll, was one of the founding members and past CWC president. As chief nurse at the Chuuk State Hospital, Poll left a lasting impression on her daughter. “I watched her go to work every day, care for others, and be a valuable member of our local community,” recalled Stinnett, who took over as CWC president after her mother’s passing in 2010. 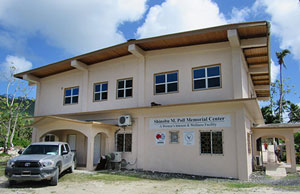 Poll not only left a legacy with her daughter, but also with the Chuuk Women’s Council. Land that she donated to the council now hosts the Shinobu M. Poll Memorial Center (also known as the CWC Health & Wellness Center), headquarters of the CWC.

The two-story center is home to a multitude of programs and healthcare services specific to women and families. Its convenient one-stop-shop model allows visitors to have a reproductive consultation at the health clinic, get a cancer screening, and attend CWC’s “Young Women Empowerment” program, all in one day.

Stinnett attests that education is the main factor that stands between Chuuk women and leadership positions, primarily in healthcare. On average, Micronesian youth complete fewer than 10 years of school. With funds from the United States government, Japan, Australia, the State of Hawaii, the Asian Development Bank, the USAID Pacific-American Climate Fund (PACAM), and a number of private organizations, the council hosts training programs geared toward women of all ages, particularly those who have not completed high school.

The council has found that the best way to educate Chuuk women is through local leaders. “Chuukese and other Micronesian women understand our customs, our culture, and the conditions and circumstances that Micronesian women live with on a daily basis,” explained Stinnett. The Papa Ola Lokahi-funded Healthy Lifestyles Program makes this possible. Through this train-the-trainer leadership program, women from Micronesia’s main island, Weno, and lagoon islands are equipped with tools to conduct prevention and educational classes in their own villages and schools.

Classes mainly focus on women’s health issues, including personal well-being, sex education, and empowerment of young women. “We continually have events at the CWC Health & Wellness Center that provide the opportunity for our young girls to learn about the value of an education and the pitfalls preventing them from obtaining a college degree or special trade skills,” said Stinnett.

Because FSM has the world’s second-highest rate of diabetes and obesity per capita, their training covers nutrition, cooking, exercise, and diabetes prevention and control. Other health-specific causes they have taken on include STD education, abstinence, childhood immunizations, and vitamin A deficiency.

Since its founding, CWC has become the umbrella organization for more than 60 individual women’s agencies in Chuuk. “We have a network that allows us to interact with women leaders throughout Chuuk on a wide range of issues from health, food security, and services provided by the government to the communities,” stated Stinnett. The council allows for more streamlined communication among the groups and opportunities for shared resources.

The Responsibility of Caregiving

Stinnett believes that women are the key to improving healthcare in Micronesia. The Chuuk Women’s Council’s focus on raising up women leaders, particularly in healthcare, stems from cultural roots. Stinnett explained, “Women are caregivers – whether it’s within their family, the community, or in the healthcare system. Women grow up caring for their siblings, younger relatives, and eventually their parents and older relatives.”

This caregiver role makes a career in healthcare seem like a natural fit. “Women gain and keep this knowledge from a young age, and when elevated to a leadership position in any healthcare system, we fully understand it is because it’s personal to us; it’s close to our hearts. And it’s not just a job, but rather a responsibility,” said Stinnett. “We continue to teach the importance of education and to pursue their desires to become nurses, doctors, and leaders in the government in order to address the women’s issues that are so dear to us.”

Women gain and keep this knowledge from a young age, and when elevated to a leadership position in any healthcare system, we fully understand it is because it’s personal to us; it’s close to our hearts. And it’s not just a job, but rather a responsibility.

Currently, the lack of education and cultural taboos prevent many Chuuk women from holding jobs, careers, or leadership positions in the healthcare field. “There are still major differences between what the culture views as appropriate actions for men and women. The gender gap encompasses attending school, working, driving vehicles, and work-related travel. Girls are even expected to quit school to tend to family matters if needed,” explained Stinnett.

She personally experienced these barriers as a young woman who left Micronesia to attend college in North Carolina. Stinnett returned to her homeland before her studies were completed in order to attend a funeral and was not allowed to return to the U.S. to finish her education. This roadblock has inspired her to advocate for equal educational opportunities for women across Micronesia.

While allowing girls to leave the island for school has become more accepted, Stinnett recognizes a continued need for change in the cultural climate. In FSM, appointing women to governmental and healthcare leadership positions is not common. Currently, there are only five female doctors employed by the state hospital. The chief nurse and chief of public health are also women. Even still, females represent only a small fraction of the total number of those in healthcare leadership positions.

FSM’s political seats are also filled mainly by men. So far, a woman has not yet been elected to serve on the Federated State of Micronesia National Congress. Only two women in past 40 years have served on the Chuuk State Legislature. Stinnett says this is why their work of encouraging young girls to pursue these positions is so important.

“The Chuuk Women’s Council consistently addresses the needs to have more women involved in healthcare, and of course, in leadership roles in our state legislature or our state hospital. The encouragement to provide scholarship specifically to women to become medical doctors and hospital administrators is a constant issue which we broach every opportunity we can,” relayed Stinnett.

Women are coming together to address the need for their involvement in leadership positions…women need to sit at the table where laws are made and discussions are had that support women, that give them opportunities, and that include them in the process of decision making.

As with any shift of social norms, the change that needs to take place in order for Chuukese women to gain educational and professional independence may take a long time. But through the work of the CWC, Stinnett sees hope on the horizon. “Women are coming together to address the need for their involvement in leadership positions…women need to sit at the table where laws are made and discussions are had that support women, that give them opportunities, and that include them in the process of decision making.”

CWC has seen a multitude of victories since their founding. Recently, they have had a hand in getting the Age of Consent law changed from age 13 to 18. They also started a program to free young girls from sex trafficking and prostitution, providing them a safe place and trusted counsel.

For changes like these and for the future of Micronesian women in healthcare leadership, Stinnett is confident, “We will be successful – it’s just a matter of time.”