Back to The Death Certificate: A Document to be Honored and Accurate

Death certificates, collected since approximately 1904, are vital records with dedicated processes for completion and filing. According to the Social Security Administration, the funeral director will report the death. Depending on the jurisdiction, the funeral director might request additional certified copies in addition to the original certificate for families since it is a strategic legal document used in many after-death transactions, such as processing death and life insurance benefits, conducting bank account and property changes, and release of retirement funds. If allowed by jurisdictional law, a family member may also request a copy from the state, usually for a fee. At times, the death certificate serves as an important document for civil and criminal proceedings.

Though most states have an electronic registry, the death certification process varies from state to state. However, all states use the same form, the U.S. Standardized Certificate of Death. The certificate is divided into three sections. The first 23 fields (Figure 1) and the last five fields (Figure 2) collect information that ranges from the usual identifying statistics like name, age, and birthdate and place to educational achievement, occupation, and race. These fields are usually completed by the funeral director. 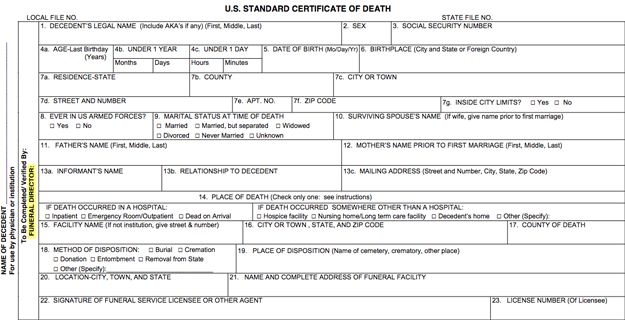 The document’s remaining fields (Figure 3) are included under the section referred to as the “cause of death” section. These fields are dedicated to the “chain of events — diseases, injuries, or complications — that directly caused the death.” Tobacco use is addressed in this section, as is the manner of death: natural, accidental, suicide, or homicide. “Could not be determined” or “pending investigation” are additional checkboxes for deaths because certification needs to be completed within several days of death. State laws also dictate who is eligible to complete this section, including individuals with formal medical training and others who don’t. Certificates can be amended when information is available, again a process that varies from state to state. 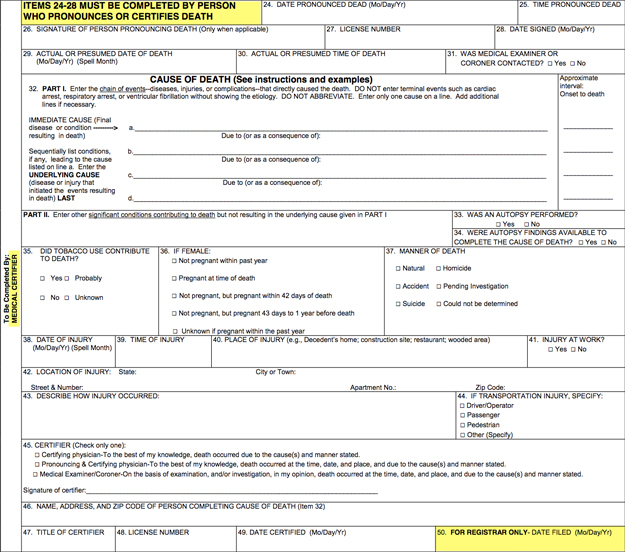 Figure 3. “Cause of Death” section of the U.S. Standard Certificate of Death

According to the Centers for Disease Control and Prevention (CDC), the home of the National Center for Health Statistics (NCHS), the funeral director is not just responsible for completion of the first and third section, they are also often responsible for getting the death certificate’s cause of death section completed by the jurisdiction’s designees. From the funeral director, the death certificate takes a standardized path, going to the state’s registrar at the office of vital statistics where the “date filed” is entered and the information eventually reaches the NCHS.

Experts said it’s important to note that the death certification process is sometimes referred to the medicolegal system for review by medical examiners and coroners. Not all of these reviews include a post-mortem exam, but according to a 2016 National Science and Technology Council report, the medicolegal system completes nearly 500,000 autopsies and post-mortem exams annually. Most of these medicolegal reviews and exams are needed when natural death might be in question or for the other categories noted on the death certificate: accidental, suicide, homicide, indeterminate, or pending investigation. When families request an amended certification, these teams are also usually involved.

Medical examiners usually have a medical background; many are pathologists, or forensic pathologists with special training related to examining the decedent’s physical and laboratory findings. According to experts, most coroner systems have on-the-job training and are either elected or appointed, depending on local statutes. The National Association of Medical Examiners (NAME) has a voluntary accreditation program for medical examiner/coroner offices.

Duties of each responsible person or agency