In April 2016, a drone was accepted into the Smithsonian’s National Air and Space Museum collection after completing the first drone delivery approved by the Federal Aviation Administration (FAA). Media from four different continents covered the drone’s historic flight, which took place in Wise County, Virginia, during the largest medical outreach event in the United States. The Health Wagon and Remote Area Medical® (RAM) have partnered on the RAM – Wise Health Expedition since 2000, but July 2015 marked the first time that the rural event received medicine delivered by drone.

“It was a very significant moment,” says Dr. Teresa Gardner Tyson, the Health Wagon’s executive director. “To know that we were making history here in far southwest Virginia, it was just incredible to be a part of that.” 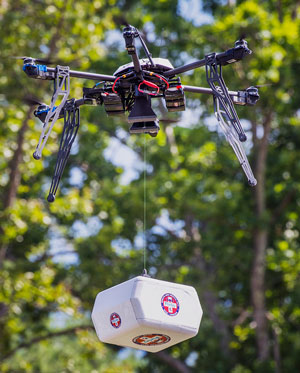 The Wise County drone delivery helps open the door to drone usage in rural healthcare. But, while the potential for drones (also called unmanned aircraft systems, or UAS) to address geographic barriers is great, it’s important to note that current restrictions prevent groups from simply buying a drone and using it in healthcare delivery.

Terry Sando, UAS Sector Senior Manager for the Grand Forks Region Economic Development Corporation in North Dakota, explains that, right now, the FAA’s Small UAS rule (Part 107) “allows unmanned systems up to 55 pounds to fly up to 400 feet, but they have to stay within visual line of sight.”

Staying within visual line of sight means that operators need to be able to see the drone at all times, which is restricting if the drone needs to travel farther than the operators can reach. One way around this is the use of a chase plane, which flies behind the drone to keep it in sight.

Organizations are working to ease these restrictions by conducting studies to show that flying drones beyond visual line-of-sight can be safe. “Beyond visual line-of-sight is going to be a major milestone that we have to surpass to be able to get to the convenience as well as the timeliness of rural healthcare types of operations,” says Sando, whose region is a leader in UAS activity.

The University of North Dakota and Virginia Tech were selected by the FAA to be among a handful of test sites for integrating UAS into the national airspace. Both regions are ideal for this type of testing, since their rural areas have wide-open airspaces with little traffic.

In 2015, RAM had been approached about the potential of drone usage. When the organization shared the phone call with Gardner Tyson, she recommended using a drone to deliver medication and medical supplies to patients.

The call could not have come at a better time: Wise County had received a record 42 inches of snow in February 2015, so people living in mountainous terrain were unable to drive to the pharmacy to pick up their needed prescriptions. Even the National Guard, called in to assist residents after the snowfall, struggled to deliver medicine like insulin to patients. Given the many obvious needs that drones could address in their area, the Health Wagon and RAM were eager to participate in a test event.

Anything that we can put in our armor to address healthcare disparities, any resource that we can bring to the region, it’s all welcomed.

After the phone call, the two organizations contacted Appalachian College of Pharmacy. These organizations joined forces with the Wise County Economic & Industrial Development, the Mid-Atlantic Aviation Partnership – Virginia Tech, and NASA Langley Research Center to make this possibility of drone delivery a reality. Since the event was part of the FAA study, Virginia Tech handled the application process and received approval to fly the drone.

Since 2015 was the Health Wagon and RAM’s 16th year hosting the outreach event, program coordinators were able to determine based on past events what supplies the drone would need to deliver. For example, the organizations could assess approximately how many patients would arrive needing insulin and then pack that number of units onto the drone for delivery.

On the day of the event, a fixed-wing aircraft brought the medicine from Tazewell County Airport to the Lonesome Pine Airport in the community of Wise. Project coordinators and volunteers loaded these 20 prescription medications onto a drone. Then the drone flew to the medical outreach event held at the fairgrounds, where the pharmacists unloaded the supplies.

Gardner Tyson hopes her organization and RAM can continue to use drones in the future. “We’ve got a very large geographical footprint here, serving the indigent patients in far southwest Virginia and the Appalachian Mountains, so drone usage would provide a great opportunity to supplement the health services that we currently have.”

“We’re all the mobile health available here in the mountains. You can’t foresee everything that you’re going to need on a daily basis,” Gardner Tyson explains. “You’re going to get out in the field and maybe we didn’t pack sutures and we have somebody come in with lacerations, or maybe we didn’t have this particular type of insulin but we’ve got it back at the field office.” Drones, then, could bring in those missing supplies.

Gardner Tyson also can see drones being used for carrying larger supplies like automated external defibrillators (AEDs) to reach patients when ambulances can’t. “Transportation is a real issue here for our patients,” she explains, “so being able to get them their medication and medical supplies is going to be a game-changer.”

Currently, most drone use in rural healthcare takes place outside of the United States, as other countries’ laws provide more flexibility in drone experimentation. Drones in Rwanda, for example, are starting to replace helicopters in bringing blood products to rural clinics, and drones allow up to 150 deliveries in one day. According to Sando, using a helicopter costs around $10,000, but a drone can bring that cost down to hundreds of dollars.

Clinics in Malawi are using drones in HIV testing. Rural clinics can take samples of babies’ blood, load the samples onto a drone, and fly the drone to a larger clinic for testing. Clinics receive test results and babies receive needed care much sooner than by traditional transportation methods.

In addition to deliveries, drones can also assist in emergency medical services. A drone in the Netherlands carries a defibrillator and a video/communications device for emergencies. The TU Delft Ambulance Drone can reach patients before an ambulance does, and the communications device talks bystanders through hooking up the defibrillator, performing CPR, and stabilizing the patient until the ambulance arrives.

Other Potential Uses for Drones

Sando also foresees drones being used to carry anti-venom to snakebite victims. He remembers from his military days in Texas that the state has 15 potentially dangerous snake species or subspecies, and each type of venom requires a different anti-venom to counteract the effects. If drones could carry a sample of venom to a clinic, the clinic could quickly send the correct anti-venom to the victim.

Drones could also be used for search and rescue, since they provide a view unavailable to people searching on foot. In addition, drones can be equipped with thermal detection devices to locate people who aren’t visible from the ground or air. After natural disasters like blizzards, drones could fly over vehicles parked on the side of the road and determine if there are people inside.

Drones equipped with precision spraying ability could quickly spray large areas of standing water with insecticides. By more effectively reducing the mosquito population, communities can reduce or prevent cases of West Nile and Zika for human and animal populations.

Drones could even be used to respond to farm accidents. If someone fell into a grain bin, a drone could send down a lifeline to lift the person out. Someday, drones could even transfer people, so a farmer whose limb gets caught in a baler or grain auger could have a surgeon flown to him or her and receive medical attention much more quickly than if the farmer had to wait for an ambulance.

“A lot of great technologies will be coming down the road,” Sando says. 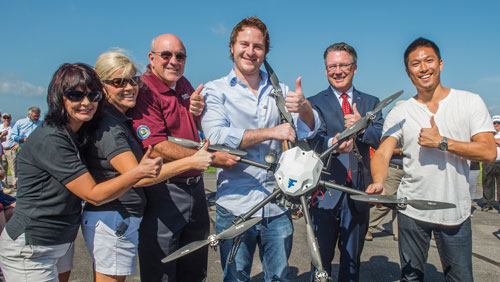 Participants at the RAM – Wise Health Expedition pose with the drone that made the first FAA-approved delivery. © 2015 tim cox PhotoGraphics, Inc.

For rural healthcare groups looking to use drones in their work, Gardner Tyson recommends teaming up with any regional organizations that are involved with drones. Academic and aviation organizations, for example, will have a better understanding of the drone approval process and current restrictions of drone usage. In addition, the FAA’s Unmanned Aircraft Systems webpage provides more information on flying drones and requesting airspace authorization.

It’s going to save lives. It’s going to change lives and empower people to take better care of themselves if we can overcome limitations.

It’s hard to say what the future holds, as policies and technologies continue to change. But it seems that drones can play an important role in improving healthcare delivery in rural areas. “It’s going to save lives,” Gardner Tyson says. “It’s going to change lives and empower people to take better care of themselves if we can overcome limitations.”