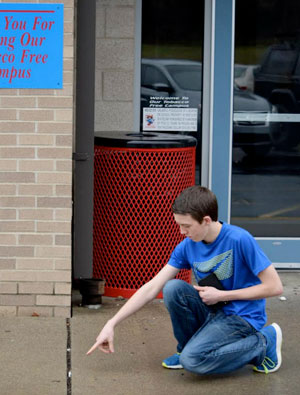 A Casey Youth Coalition member points out a cigarette butt near a “Tobacco Free Campus” sign.

Casey County Schools in Appalachian Kentucky already had a tobacco-free policy for its campus, but high school students found that this policy wasn’t being enforced.

“Tobacco crops have sustained families here since the 1800s, creating a loyalty to the crop,” said Cathy Williams, Prevention Specialist at Casey County Schools. “Using tobacco is considered a norm in this county, so most violations of the policy were overlooked.”

In other cases, school staff were aware of students smoking on school property but couldn’t catch them in the act, so members of the Casey Youth Coalition (CYC) took pictures of cigarette butts on school grounds as well as the school’s “hotspots,” such as bathrooms and outdoor spaces next to windowless walls, where students could smoke hidden from teachers’ sight.

Their efforts led to better monitoring and even remodeling. The schools relied on hall monitors to keep track of students during and between classes as well as added windows to “hotspot” areas so that school staff could better observe student activity. According to the Kentucky Incentives for Prevention Survey, this effort helped lower the 30-day tobacco use in 10th grade by 10% from 2014 to 2016, the lowest it had been since 2001.

According to the American Lung Association document Cutting Tobacco’s Rural Roots, “youth who live in rural areas were three times as likely as both urban and suburban youth to smoke.”

Rhonda Williams, Chronic Disease Prevention Chief at the Vermont Department of Health, believes that understanding these trends and behaviors provide an opportunity for structured activity at schools in rural communities. “Youth-led tobacco initiatives can make a real difference in rural communities,” said Williams. “Many of these areas often don’t have central gathering places for young people, like movie theaters or youth centers. That creates a real temptation for kids to try something risky like tobacco, because they think there’s nothing to do.”

CYC members also worked to educate their classmates on the dangers of tobacco use. One campaign was called “Airing Out Big Tobacco’s Dirty Laundry,” in which students used a clothesline to hang pieces of clothing-shaped paper with facts about the ways that tobacco companies target youth to replace smokers who have died. “Lots of students took the time to read the information,” said Cathy Williams.

Youth in Vermont have participated in numerous efforts to clean up their communities. In Enosburgh, with a population of just over 1,200 people, students and adults picked up over 5,000 cigarette butts in just one hour.

These clean-up efforts led youth and other community members to other actions, like outreach to policymakers. “The clean-up generates both interest and concern because it sheds light on other issues that Vermont cares about, including water quality of Lake Champlain,” explained Rhonda Williams. Chemicals in cigarette butts can seep into the soil and water, and the cigarette butts themselves can go down drains and end up in lakes and waterways.

Vermont Kids Against Tobacco (VKAT) is a statewide youth-led group geared toward middle school students, while Our Voices Xposed (OVX) is for high school students. Both groups were initially funded by the American Legacy Foundation, now called the Truth Initiative. 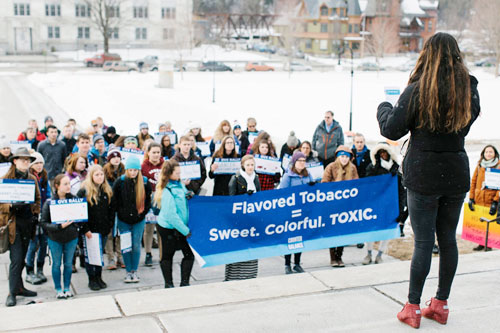 A member of Vermont’s Our Voices Xposed speaks to fellow group members on the statehouse steps.

Every February, Vermont youth travel to Montpelier to participate in Rally Day. Starting in 2012, OVX has focused on raising awareness about the dangers of secondhand smoke in confined spaces like vehicles. The students, some of whom were wearing gas masks and decorated T-shirts, marched to the State House. Students were interviewed by local and state media and met with legislators to discuss their concerns.

The next year, VKAT and OVX contributed to a campaign called Free My Ride, which was developed by the Health Department and its media vendor, Rescue. Youth and community coalitions collected signatures and people’s stories about secondhand smoke in vehicles. Thanks in part to these efforts, the state legislature passed into law a bill that prohibited smoking in vehicles in which a passenger is a child younger than 8 years old or weighing less than 80 pounds.

Two rural communities in Vermont, Weathersfield and Manchester, passed ordinances that prevent tobacco retailers from selling within 1,000 feet of a school or childcare center. “So you can see where youth engagement and policy at the local and state level go hand-in-hand,” said Rhonda Williams.

But it’s not just Kentucky and Vermont teens who are making changes in their states. A Montana teen-led organization called reACT participates in Celebration on the Hill, in which youth educate state legislators on tobacco use’s health effects and corporate tobacco’s marketing practices. During the event, students get to learn about policymaking by watching the legislature in session and meeting the elected officials.

“It is inspiring for many, and often the youth remain invested in becoming more active citizens,” said Jennifer Ullman, Program Manager of Montana Tobacco Use Prevention Program (MTUPP). “The Celebration on the Hill is so popular that MTUPP has had to limit the number of attendees from each community to prevent overflow.”

The efforts of Montana’s reACT students led to rural Powell County adding e-cigarettes to its Clean Indoor Air Act Protocol. The students realized that e-cigarette use among their classmates was increasing, so they researched and gathered data. In September 2016, the youth presented to their local Board of Health. On December 5 of that year, the Board voted to pass the amendment including e-cigarettes in its protocol.

Looking to reduce tobacco use in your community? The Geographic Health Equity Alliance’s Call to Action: Addressing Rural Cancer Health Disparities and the RHIhub’s Tobacco Control and Prevention Toolkit are useful resources.

In Vermont, youth and youth advisors approached the Vermont Department of Health about adding e-cigarettes as a priority area. “We had been reviewing concerns about e-cigarettes and were looking at what other states were doing,” said Rhonda Williams, “but it had not yet been made a priority in our youth engagement work. The kids were a catalyst for action.”

The Health Department, in collaboration with the Vermont Agency of Education, created a PowerPoint presentation that youth or youth advisors could use to raise awareness in their communities about e-cigarettes. The department also issued a health advisory of its position on e-cigarettes and recommendations for Vermont’s communities. In July 2016, Vermont became the ninth state to restrict e-cigarettes (no longer available online) in the same places where lit tobacco products are restricted.

The Successes and Strengths of Youth 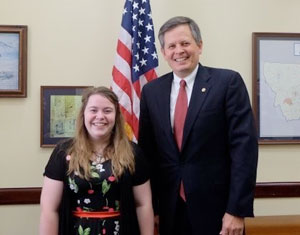 In September 2017, the CYC received the Youth Empowerment Systems (YES) Award for Youth Coalition of the Year at the Kentucky Prevention Network Conference for their work in reducing tobacco use on campus.

In 2015, Montana teen Lily Kraft was named “West Region National Youth Advocate of the Year Ambassador” (YAYA) by the Campaign for Tobacco-Free Kids (CTFK). Ullman said that YAYAs are those students who “have been stellar leaders in policy promotion with their communities and have been given scholarships, training, public speaking opportunities, and additional mentorship from CTFK.” Kraft founded her local reACT chapter and was the first high school student to be appointed to the Montana Tobacco Advisory Board.

In addition, Montana became the first state in 2008 to have a tobacco-free high school rodeo association, cutting down on tobacco advertising as well as tobacco use at the events. At these rodeos, reACT provides education about tobacco and quit line resources, and contestants can sign a Tobacco Free Rodeo Pledge. 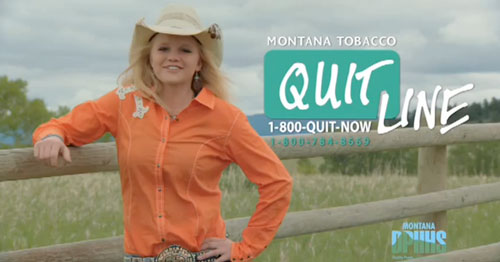 Vermont’s Rhonda Williams reported that, earlier this year, the CDC’s Office on Smoking and Health and its collaborator, the Center for Public Health Systems Science at Washington University in St. Louis, approached the Vermont Department of Health. Thanks to years of effort by VKAT, OVX, youth advisors, and program staff, Vermont will be featured as one of two states in a case study of youth engagement for the next Youth Engagement Guide as part of Best Practices for Comprehensive Tobacco Control Programs.

So why have these youth groups seen so much change in their communities? “Youth each bring their own gifts to the group and can find creative outlet in the activities,” said Ullman of Montana, “which often involve school events, art displays, policy promotion, or teaching younger youth about avoiding tobacco or achieving cessation.”

Plus, youth tend to take a different approach than adults when talking to their peers. “When they speak with each other about tobacco,” Rhonda Williams explained, “it doesn’t sound like, ‘This is what you should do.’ Rather, it’s ‘This is what tobacco use looks like.’” She added that, while adults might focus on setting rules, youth groups tend to focus on providing information and helping peers make their own decisions.

They capture the attention of political leaders and the media, naturally challenging the traditional attitudes that may restrict and limit how adults think and act.

“Young people can be effective advocates who resonate among their peers and can say tough things at which adults in their lives would bristle if coming from someone older,” said Keith A. Vensey, Director of the Geographic Health Equity Alliance (GHEA) within Community Anti-Drug Coalitions of America (CADCA). GHEA, a CDC-funded national network, works to advance tobacco control and cancer prevention in populations experiencing geography-based health disparities. “They capture the attention of political leaders and the media, naturally challenging the traditional attitudes that may restrict and limit how adults think and act.”

Partnering with community coalitions can strengthen youth’s influence with adults as well. “Partnerships are empowering,” said Naa Aku Addo, one of the Tobacco Control and Prevention Program specialists at the Vermont Department of Health. “It’s impactful. It solidifies the voice they already have and increases their confidence to speak out about tobacco.”

“Our work in Vermont – and across the country – would be much harder if we didn’t have these youth-led initiatives, with their on-the-ground knowledge, commitment, and amazing energy,” said Rhonda Williams. “Much, much, much harder.”