Visit the RHIhub Rural Health Models and Innovations section to read how a program in Oregon also used CATCH.

It was the middle of Winter in Carmi, Illinois, and Milly Pate was weighing her options. As the lead teacher of the Washington Attendance Center’s Pre-kindergarten (Pre-K) program, she was responsible to ensure her students met the Physical Development and Health requirements of the state. The snow-covered playground equipment made it impossible to test the students’ balance, a pressing priority on the class’s checklist. 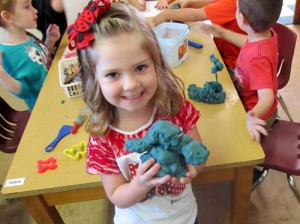 Brianna Hale holds her clay model of “Jumping Jackie,” one of CATCH’s characters that helps students learn about health and nutrition.

Pate had to get creative. She set up a balance beam they received from the Coordinated Approach To Child Health (CATCH) program a few years earlier. A CATCH puppet named Gus Goodfood gave careful instructions to the children, and the balance tests were completed indoors with much enthusiasm. “They listen to Gus more than they listen to me sometimes!” chuckled Pate.

The puppet and equipment are just a fraction of what the national CATCH initiative provides for schools who adopt the CATCH Early Childhood program. Age-appropriate curriculums, activities, stories, games, puzzles, and equipment are all designed to promote physical activity and healthy food choices for children. Since its start in the late 1980’s, CATCH has become the largest school-based health program in the country.

If It Ain’t Fun, It Don’t Get Done

Carmi is a part of the 16-county Illinois Delta Region that covers the southern tip of the state. The SIU Center for Rural Health and Social Service Development (CRHSSD) first introduced CATCH to the region in 2006. They were looking for a way to implement the Coordinated School Health model (no longer available online) in area schools, and CATCH seemed to be the best answer.

CATCH had a tremendous amount of research behind the program. We liked it and thought it would be appropriate for our region.

“CATCH had a tremendous amount of research behind the program. We liked it and thought it would be appropriate for our region,” said Jeff Franklin, the Illinois Delta Network CATCH project director. The Illinois CATCH on to Health! Consortium (ICHC) was formed and received funding from the Federal Office of Rural Health Policy’s Delta States Rural Development Network Grant to launch CATCH programs in schools throughout the Illinois Delta region. ICHC had high hopes the new initiative would decrease cardiovascular disease, obesity, and the lack of physical activity prevalent in the region’s youth.

In 2006, Phyllis Wood of the Egyptian Health Department (EHD) took on the role of CATCH coordinator, covering six counties. She has since started the program in 16 elementary schools, helping them apply for grants and training staff to integrate the new materials. “It’s unreal how easy it is. Once they have the curriculum, they can use it for years,” said Wood.

Wood, whose motto is, “if it ain’t fun, it don’t get done,” also conducts trainings and activities for parents, reflecting CATCH’s philosophy that involving families in children’s health can help to alter a child’s decisions toward more positive food and activity choices.

Carol Caldara is a national CATCH specialist and representative of FlagHouse, CATCH’s publisher and distributor. Having worked with many Illinois organizations that implement CATCH, she acknowledges that ICHC has what it takes to launch CATCH successfully:  a funding source, committed leaders, and training. “We can provide the help and guidance to establish a CATCH in schools, but they have to take the ball and get CATCH set up in their region,” stated Caldara.

Adapting to their Environment

According to Caldara, CATCH has done very well in small towns like Carmi. “It has the research, evidence, and capacity to provide support for sustainable implementations and positive outcomes in rural communities,” said Caldara.

For CATCH to work for rural areas, Wood emphasizes that it must be tailored to the demographic and educational needs of each school. CATCH has been popular throughout Illinois due in large part to its adaptability to a variety of settings. “CATCH works in a cornfield and a city. In our area, we have both,” said Wood.

To me, CATCH isn’t just one more thing on our plate. It helps to implement what the state requires, and it is also an interesting way for the children to learn.

Not only is CATCH adaptable, but it also complements programs that already exist within the school. “To me, CATCH isn’t just one more thing on our plate. It helps to implement what the state requires, and it is also an interesting way for the children to learn,” commented Pate, who teaches CATCH lessons once a month using interactive visuals like Go, Slow, Whoa.

ICHC organizes area-wide trainings for CATCH school staff, including conferences for nutrition services and physical educators. “When you work with schools in a rural area, it’s not something you do to them, it’s something you do with them,” emphasizes Wood. The events create opportunities for networking, brainstorming, and bringing up concerns with state representatives.

CATCH has gained partnerships with national groups like YMCA, USDA’s SNAP-Ed, and the National Head Start Association, as well as local organizations like public health departments and hospitals. CATCH has created an avenue for healthcare facilities to partner with schools that share their vision. “The move from volume to value-based care has encouraged healthcare providers to shift their thinking from only a patient-centered approach to improving the health of the entire community,” said Caldara.

CRHSSD has seen positive effects since starting ICHC. In just nine years, 80 of the 105 elementary schools in the Illinois Delta Region have used CATCH curriculums. CRHSSD has also expanded their reach to encompass Pre-K through eighth grade. Schools are reporting that students are making healthier choices regarding physical activities and nutrition as a result of CATCH. 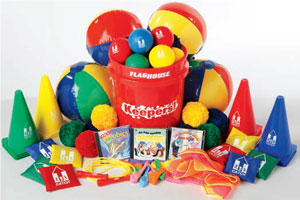 A sample of the CATCH equipment used in classrooms.

Franklin says that CATCH is helping to create safe and healthy environments for the whole child. “If you eat better, you feel better, you can act better, and you’re more emotionally equipped to handle things that come your way,” said Franklin. “Whether it’s nutrition, exercise, or recreational activities, we are giving children the knowledge and skills to make healthy choices for a lifetime.”

Three years from now, ICHC plans to engage 100% of their area’s schools in CATCH curriculums. Franklin believes this goal is attainable through creating program sustainability, and sustainability will only come when health and education are working together to improve the Coordinated School Health’s expanded model, Whole School, Whole Community, Whole Child.

If the CATCH philosophy is ingrained, the grant funds may be gone, but the principles will still live on.

“CATCH is an overall philosophy among students and staff,” says Franklin. “If the CATCH philosophy is ingrained, the grant funds may be gone, but the principles will still live on.” Franklin calls this ‘CATCHify-ing.’ “We don’t always ask them to get rid of old activities, just to CATCHify them. For instance, the old structure of P.E. is, if you get tagged, you sit out. CATCHify-ing the game would be allowing the child to re-enter after doing ten jumping jacks,” explained Franklin. “It’s just thinking outside of the box or looking through a different lens.”