Back to What’s MAT Got to Do with It? Medication-Assisted Treatment for Opioid Use Disorder in Rural America.

A well-accepted pain definition comes from the International Association for the Study of Pain: “Pain is an unpleasant sensory and emotional experience that is associated with actual or potential tissue damage or described in such terms.”

Experts agree pain has no objective measure and no easy treatment.

How Do Opioids Work?

Opioids don’t have any direct impact on the body area that hurts or is injured. They don’t attach to a broken bone, or to a decayed or infected tooth, or the incision from an operation. Unlike medications such as ibuprofen, they don’t decrease inflammation that often causes pain. Instead, when an opioid is taken as a pill, injected into a vein, or even smoked, it travels through the blood stream and relieves pain by acting on the brain. Once in the brain, opioids influence the way the brain thinks and feels about an unpleasant sensation. According to the National Institute on Drug Abuse (NIDA), here are three specific brain areas where opioids have influence: 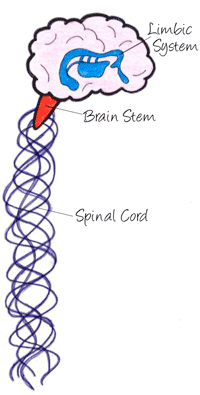 Four C’s of Opioid Use Disorder

Dopamine is a brain chemical that influences the brain’s reward circuit. This circuit craves behaviors that give pleasure, like engaging with friends, or behaviors that keep us alive, like eating.

Meanwhile, the brain realizes it can’t tolerate that constant dopamine flood. Eventually it decreases dopamine production: less dopamine, less flooding, less pleasure. The brain becomes depressed, flat, and lifeless. But the reward circuit still craves euphoria. The new norm? A brain that can’t experience joy, euphoria that can’t be reproduced, and craving in the reward circuit that has no brakes: the reward circuit gone wrong, creating the brain disease that is opioid use disorder, a complex disorder that is also influenced by various genetic and psychosocial factors. 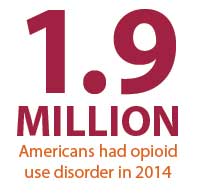 According to the Substance Abuse and Mental Health Services Administration (SAMHSA), “in 2014, an estimated 1.9 million people had an opioid use disorder related to prescription pain relievers.”

It’s difficult to determine the exact number of rural residents with OUD, but experts say there are proxy data. Proxy measures might be found in 2013-2017 county-level overdose data since those fatality numbers perhaps represent many who might have benefited from MAT. Proxy numbers could be found in nonmetropolitan drug-related incarceration rates or patient numbers presenting to emergency rooms requesting refills for lost prescriptions. Proxy numbers can be tracked by using a state drug monitoring program which collects opioid dispensing information. Or maybe OUD patients are among a clinic’s established patients who present for pain out of proportion to a normal physical exam, with vital signs and history suggestive of opioid withdrawal. Proxy numbers might even include patients who finally say “I need help.”