When most people think of miners – and mining-related diseases like black lung – they tend to think of the Appalachian region of the United States. But New Mexico is home to a variety of mining operations as well as the lung diseases that can accompany these workplaces.

The National Institute for Occupational Safety and Health (NIOSH) reports that, from 2000 to 2009, Colfax County in northern New Mexico had the 32nd highest death rate from coal workers’ pneumoconiosis (black lung) in the United States, with an age-adjusted death rate of 114.4 per million people. The national rate is only 2.9 per million.

“Most people are not even aware that New Mexico is a hotspot because all the press has been about Appalachia,” said Dr. Akshay Sood, the Miners’ Colfax Medical Center Endowed Chair in Mining-Related Lung Diseases at the University of New Mexico. “We’re not only a hotspot for black lung; we’re also a hotspot for silicosis, other pneumoconiosis, sarcoidosis, and interstitial lung disease.”

The New Mexico Mobile Screening Program for Miners works to cool down this hotspot with the help of funding from the Health Resources and Services Administration’s Black Lung Clinics Program (BLCP) and the Radiation Exposure Screening & Education Program (RESEP). The mobile clinic team combines this funding with other funding from federal, state, and philanthropic programs.

The program uses screenings, specialty care via telehealth, and collaboration to make sure miners get the healthcare they need. “New Mexico has a mass variety of mines all over the state, whether it’s copper, uranium, or coal,” said Megan Moreno, Black Lung Coordinator at the Miners’ Colfax Medical Center (MCMC).

MCMC, located in rural Raton, is part of the state constitution. Eric Armstrong, Director of Ancillary Services at MCMC, said, “We were originally established for the care of miners and their families. The application of our HRSA grant to continue services to the miners and mining communities of New Mexico was just a natural extension.”

Sood says of their patients, “It is not the ability to pay that limits their ability to see a physician, because most miners are insured through work or through Indian Health Service, Medicare, and Medicaid. It is the fact that they have to drive four hours to see a physician.”

Instead, the New Mexico Mobile Screening Program for Miners brings healthcare providers to the patients. The mobile clinic team consists of five advanced practice providers who screen miners for respiratory diseases such as black lung and silicosis as well as non-respiratory diseases. In a semi, providers travel to 12 different locations in the state and can complete a physical, chest X-ray, and a spirometry test.

When the mobile clinic visits their community, miners can schedule an appointment or walk in. “We just want to make it comfortable for them,” Moreno explained. “If they’re unable to complete certain tests, then they’re welcome to come back and finish them because no way do we want to force them to participate. But we want them to know that we genuinely care about their well-being.”

The mobile clinic also has telemedicine capability so that the mobile team can connect and consult with experts from the University of New Mexico (UNM). “I’m unaware of anybody in the world combining a mobile screening clinic with telemedicine capabilities,” said Sood, “which really makes it a two-step innovation rather than a one-step innovation.” 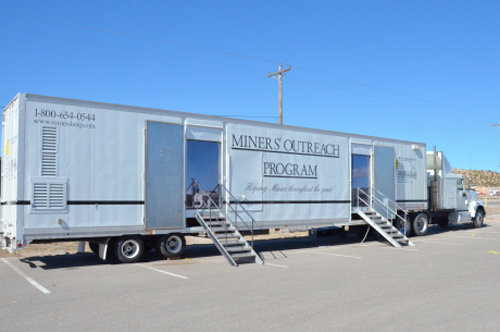 This semi houses the New Mexico Mobile Screening Program for Miners, which travels to rural communities across the state.

At the end of the day, some miners have the opportunity to discuss their cases with specialists through this technology. “It not only helps the patient but it very importantly helps tele-mentor the providers,” Sood said.

“The mobile clinic enhances access to screening and diagnosis services for miners,” said Allison Hutchings, Program Coordinator for the BLCP in the Federal Office of Rural Health Policy (FORHP) at HRSA. “Additionally, the ability to conduct telemedicine encounters within the mobile unit enables miners to communicate directly with a specialist about their health condition and any questions they might have.”

The mobile clinic travels to the same locations the next year to check in with the same patients and provide any needed follow-up care. “Many people – miners or non-miners, rural or non-rural – don’t seek treatment early enough due to transportation,” said Megan Lincoln, Program Coordinator for RESEP. “The mobile clinic breaks down that barrier and allows people to seek treatment early, enabling them to live a better quality of life.”

The Importance of Community

Some of the mobile clinic’s patients don’t speak English, and over half have not completed high school. Many with black lung or cancer from mining radioactive minerals don’t realize that they’re eligible for benefits through the BLCP and RESEP. Part of the mobile clinic team’s job is to educate miners about available benefits and screenings.

We’re getting more patients qualified for their Black Lung benefits. We’ve made the process a lot easier for them, knowing that they have us to rely on and they can come to us with any questions they have.

“We’re getting more patients qualified for their Black Lung benefits,” Moreno said. “We’ve made the process a lot easier for them, knowing that they have us to rely on and they can come to us with any questions they have.”

These miners belong to a tight-knit community, which facilitates the education efforts. “The miners are a brotherhood,” Sood said. Program coordinators regularly reach out to mine employers, safety officers, and unions, who then reach out to miners about the mobile clinic and screening services. They also have established partnerships with some of the pueblos or reservations. 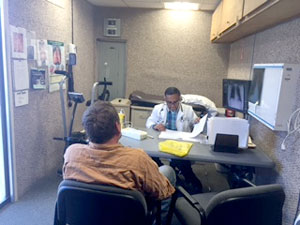 A provider meets with a patient in the semi’s clinic room.

Most miners attending the mobile clinic say that they heard of this service from traditional sources like word-of-mouth, newspapers, and community flyers. Sood gave an example: “When there’s a clinic, we reach out to the church. The church will tell everybody, and everybody in that church gets to know about it.”

That said, half of the patients report using social media, so program coordinators are looking at adding social media platforms to provide updates and information, in addition to their current methods of communication.

Through their own research, Sood and his team have found that coal miners tend to have higher rates of chronic bronchitis and airflow obstruction than other types of miners, while uranium miners are twice as likely as other miners to have cardiovascular disease. Hispanics and American Indians – about 75% of the service area population – are at lower risk of developing chronic bronchitis and airflow obstruction. Female miners, only about 5% of the service area population, tend to be healthier than their male counterparts.

Program coordinators also found that American Indian miners in their service area are interested in participating in research studies. “But they want research that engages them, not just people who come, do research, and fly away,” Sood said. “They want to see that this research is going to benefit them. They really would welcome community-engaged research.”

With additional funding, Sood and his team would love to learn more about their program’s impacts. Right now, they know from surveys that 92% of their patients rate their care as good or very good. 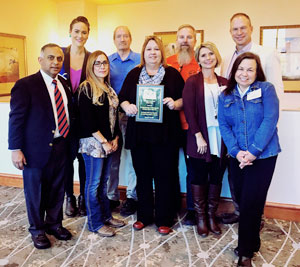 In 2017, Kandace Evans, MCMC’s community service manager at the time, was recognized at a National Coalition of Black Lung and Respiratory Disease Clinics, Inc. conference and received the Mike South Award for Outstanding Work in Black Lung Disease.

The team also developed the Project ECHO Miners’ Wellness TeleECHO Clinic, which works to develop multidisciplinary teams in rural communities that treat miners. The teleECHO clinic connects these professionals to experts at UNM.

Sood called the Project ECHO program “an attempt to hold the hands of physicians and other rural providers, to guide them through these compensation programs and take care of miners in the state of New Mexico.” UNM provides the year-round program with resources like hardware and software support.

The team also partnered with UNM to create the Miners’ Colfax Medical Center Endowed Chair in Mining-Related Lung Diseases. “One of the biggest reasons programs collapse is when the physician leaders of those programs either retire or move away or quit,” Sood said.

Armstrong and Moreno agreed. “Any time you have a program that’s lasted over 30 years,” Armstrong said, “you’re going to have a lot of turnover.” Moreno added that the program created a plan for sustainability and sticks to it, no matter who has left. Having the Endowed Chair at UNM helps guarantee that the program will always have leadership.

Along with UNM, the medical center partners with home health companies, since miners who receive compensation are eligible for home health benefits. Sood reported that these companies’ professionals are skilled at communicating with the miners and bringing their concerns to the mobile clinic. These professionals also participate in the teleECHO clinics. In the future, Sood hopes to collaborate with more Black Lung grantees and already works with the Northwest Community Action Programs of Wyoming, Inc. (NOWCAP).

“Training a rural clinical provider is not sufficient,” Sood said. “We really have to train a team.” And rural healthcare settings can create teams through telehealth. 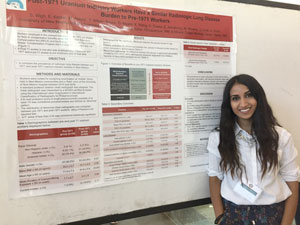 At the University of New Mexico, a trainee presents the team’s findings: “Post-1971 Uranium Industry Workers Have a Similar Radiologic Lung Disease Burden to Pre-1971 Workers.”

Moreno explained that mobile clinics are costly because you have to bring state-of-the-art equipment with you, and it’s much harder to fix broken equipment on the road. “There are definitely challenges and you have to be prepared,” she said.

While a mobile clinic benefits the service area population, it can take a toll on the staff. The mobile clinic staff leaves on a Monday and returns on a Friday, so operation at a rural fixed clinic ceases when five staff members are gone. Armstrong said, “You have to have some pretty dedicated staff, from a respiratory therapist to your radiological tech to your practitioner and your truck driver. All those people need to come together to be gone for a full week every month.”

Sood explained that people need three things to implement and keep a similar program going: passion, sponsorship, and mentorship. He said, “Passion overcomes obstacles, and there are always going to be obstacles.”

Additional Resources for Miners and Providers: