Marian David grew up in the Deep South in the 1960s. Twice monthly on Sundays, the “church ladies” in her community would gather up the girls for a tradition called Silver Teas. The girls, dressed in their Sunday best, would sit around tables set with silver teapots and fine china and talk about life.

“I’m sure we had some etiquette lessons,” David recalls, “but I remember the bonding, the love, and the talks about relationships and our purpose in life. I knew that I would do greater things in my life, so the Silver Teas served as both a reminder and preparation for that.”

Though the Silver Teas were a rite of passage of sorts for David and her peers, it somehow disappeared in later generations. A group of Silver Tea alumni has since reinstated Silver Teas in their South Carolina county by creating the Tea Time with Teens program. This program works to ultimately lower Marlboro County’s high teen pregnancy rates by supporting the holistic development of teen girls and helping them become leaders in their community.

Making Health a Part of the Culture

Tapping into a regional tradition like Silver Teas is one example of how communities can use their culture to create successful health programs.

Michael Meit, the Co-Director of the NORC Walsh Center for Rural Health Analysis in Bethesda, Maryland, notes the value of leveraging a rural area’s culture and history when building programs to promote health. “It’s trying to think about ways to weave health into the existing culture and to make health that shared cultural value,” he explains. “We want to move to a place where health is valued in that same way as family or education, where part of that American cultural value is that our kids should be healthier than we are.”

However, many regions hold different values, and “American” values look different across the country. Even “rural is not homogeneous across the United States,” says Meit. Each community has its own set of values, so a health program that works in one community might not resonate as well in another without some modifications.

Communities can work to make health a shared cultural value by looking at their existing values, cultures, and history. Tea Time with Teens, for example, takes the Silver Teas tradition and uses it as a way for teens and mentors, mothers and daughters, to have meaningful conversations about healthy decisions concerning relationships, sex, and body image, among other topics.

I remember feeling really good because I expected a lot from myself, and it made me smile that somebody else was expecting a lot too.

David recalls of her childhood’s Silver Teas: “The women would talk to you about how to carry yourself, about respect, just talking about life. Expectations were very high for you. I remember feeling really good because I expected a lot from myself, and it made me smile that somebody else was expecting a lot too.”

As the girls of the Silver Teas grew up, they noticed that this tradition had disappeared. In addition, they saw a higher number of young mothers. Currently, the teen pregnancy rate in Marlboro County (48.8 births per 1,000 mothers ages 15-19) is 1.7 times the state rate (28.5 births) and over double the national rate (24.2 births). (data no longer available online)

A group of local women saw a connection between the high teen pregnancy rates and the lack of Silver Teas or other positive programs that supported the holistic development of teens. The community also lacks a movie theater, bowling alley, and other recreational facilities for teens, and it even lacked a Girl Scouts program at the time. 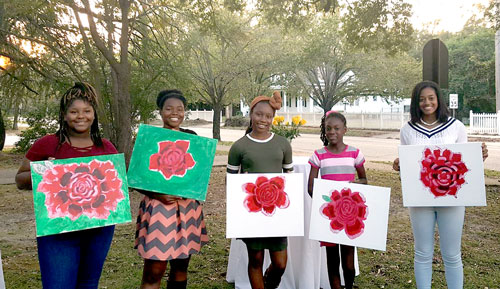 Participants proudly show off their paintings from the Mother-Daughter Engagement Event: Paint and Talk.

The women began recruiting advisors for Tea Time with Teens by placing ads in the local paper. These women are also well known in their community, making it easy for them to sit down with different groups and discuss the importance of Tea Time with Teens.

Their presence in and respect for the community are two more ways they tap into their community’s values in forming Tea Time with Teens. That’s one of the strengths of rural communities. “In the rural United States, we have really strong community networks,” says Meit of NORC. “We have strong community leaders and events.”

Ingredients of a Successful Program

In order to strengthen the bonds between girls, mothers, and other female role models, the program limits group sizes to 10 girls per three advisors. The program has about 5 or 6 tea groups of this size in the community.

Hot tea is served at the monthly meetings for a few reasons. First, it’s traditional, as the Silver Teas served hot tea in china cups. Second, hot tea encourages more conversation, since it cannot be consumed quickly. “It’s just a matter of sipping slowly,” David explains, “taking some time just to slow down the day, slow down life a little bit.” Third, many of the girls are not used to hot tea or china teacups, so they like the novelty of the experience.

For many of the mothers in the program, the Silver Teas were a new experience for them too. “My first experience was actually with Miss Marian [David], probably about five years ago,” says Shareika Townsend, mother and advisor. Now, thanks to the program, her daughter, Careka, drinks tea every day.

Careka seemed skeptical when she first heard about the program. “I thought that it was just a program where teens just drank tea, really!” she says with a laugh. “I realized that it’s a group where teens get together and talk about their lives and how they can better themselves in general.” 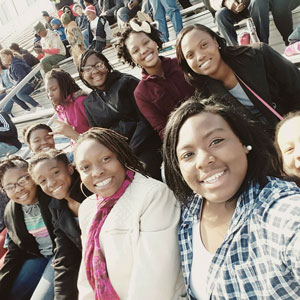 Girls from different tea groups get together for intensive workshops during the Teens Summer Leadership Institute. “Girls who normally wouldn’t speak led the program,” Townsend recalls from last year’s closing ceremony. “The ones who usually don’t talk or say too much were the first ones to volunteer to tell what took place this summer, what they learned.”

Tea Time with Teens also takes girls on field trips. Past trips included a tour of historic Charleston and nearby colleges, a first-time experience for some.

“And it might seem like some faraway, distant thing for girls who have never stepped foot on a college campus in their lives,” David says, “so we demystify that experience for them.” Advisors want all the participants to understand that opportunities like college are available for them too.

Discussing opportunities has helped strengthen bonds between the girls and women of the community. “It wasn’t even about the drinking of the tea,” David adds, recalling the Silver Teas that she and the other advisors grew up with. “We don’t even remember the food, but we remember the conversations.”

Townsend didn’t know at first how to start conversations about relationships and sex with her daughter, who began the program a few years ago. “It’s opened up our communication more,” Townsend says.

I feel like I have developed more confidence. Now, I’ve developed leadership qualities and become a better person.

Careka’s grown more comfortable not just with these conversations but with leadership roles; she used to be shy but now speaks up more and encourages her friends to join Tea Time with Teens. “This year, she wanted to run for president of the class,” Townsend says, “which was something that she never would have done in the past.”

“I feel like I have developed more confidence,” Careka says. “Now, I’ve developed leadership qualities and become a better person.” 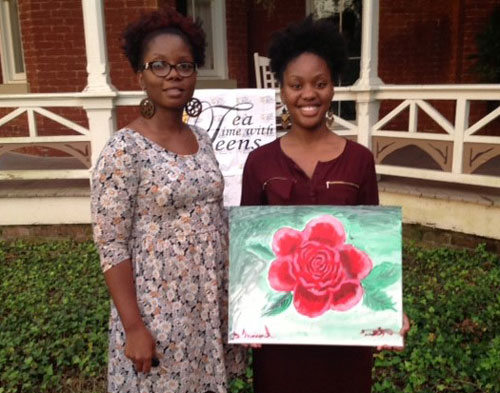 Shareika (left) and her daughter, Careka, display their artwork from a Paint and Talk Event.

Townsend has felt the benefits too: “I never viewed myself as being that person who would be on that side of being a mentor. It has meant so much for me to be able to talk to the girls and encourage them.”

“Tea Time with Teens helps combat the negative stereotypes and statistics associated with our rural area,” explains South Carolina Representative Patricia Henegan, who plans to give the girls a tour of the state capitol. “I’m confident the program will continue making an impact on its participants and the community as a whole.”

While the program is still fairly young – it started in 2009 – advisors have already seen a reduction in teen pregnancy and high school dropout rates and an increase in the number of teen girls entering and completing college.

I think rural communities in many ways may be in a better place to actually turn that corner in improving their health, because of those strong community ties and the assets that are really inherent to that.

Even if other communities don’t have a tradition of Silver Teas, they can tap into similar customs as they design health programs. “Despite the challenges that may exist,” Meit says, “I think rural communities in many ways may be in a better place to actually turn that corner in improving their health, because of those strong community ties and the assets that are really inherent to that.”