California, the most populous U.S. state, covers 155,959 square miles, with a 2021 estimated population of 39,237,836 people – 863,273 living in rural California (USDA-ERS). Sacramento, the capital, is located in the north-central region of the state. The state's largest cities are Los Angeles, San Diego, San Jose, and San Francisco. According to 2021 data from the U.S. Census Bureau, an estimated 71.1% of the state's population is White, 6.5% is African-American, 15.9% is Asian, 1.7% is American Indian or Alaska Native, 0.5% is Native Hawaiian or Other Pacific Islander, and 35.2% is of Hispanic or Latino origin. 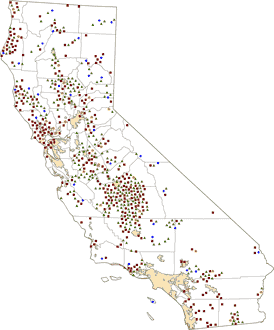 Most Californians have some form of health insurance coverage, although 7.3% of its residents lack health insurance (Kaiser, 2020). According to the USDA Economic Research Service, the average per capita income for Californians in 2020 was $70,192, with the rural per capita income at $52,022. The ERS reports, based on 2020 ACS data, that the poverty rate in rural California is 13.4%, compared with 11.4% in urban areas of the state. 11.6% of the rural population has not completed high school, while 16.2% of the urban population lacks a high school diploma according to 2016-2020 ACS data reported by ERS. The unemployment rate in rural California is 6.8, while in urban California, it is 7.3% (USDA-ERS, 2021).

California State Office of Rural Health
Email: CalSORH@oshpd.ca.gov
Collaborates with public and private entities statewide and at the regional and national levels to increase rural access to health care and to link small rural communities with state and federal resources.
view details