On a typical Sunday morning at Conetoe Chapel Missionary Baptist Church, Reverend Richard Joyner steps up to the podium to preach in work clothes instead of a suit. His attire is just one way Joyner tries to connect with his local community.

“I do this to show that I am a part of them,” said Joyner who came to Conetoe, North Carolina more than a decade ago to become head pastor of the church. It didn’t take long before he realized the desperate position of the town’s 300 residents. As the population dwindled, so had the health of those who remain.

Conetoe (pronounced “co-neat-uh”), a predominately African-American community, is located in Edgecombe County, which ranks 97th out of 100 North Carolina counties in health and social/economic factors. Joyner says that the alcoholism, poor diets, chronic diseases, single parent homes, education deficiency, and their food desert status are all contributing factors to the low ranking as well as a high rate of premature deaths. 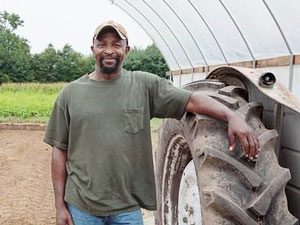 Joyner’s reaction to these problems was that of local action. “The institutions cannot be the one to make the change,” stated Joyner. “Change has to come from within the communities. We decided to fight this from a grassroots level.”

A CNN Hero and Purpose Prize winner, Joyner’s grassroots movement has rejuvenated the Conetoe community and has become one of the most effective models of its kind across the region.

In 2007, Joyner founded the Conetoe Family Life Center, a nonprofit with a focus on youth development and improving health. “We have found that we can change the children by education and opportunity, and that equals change for the whole family,” relayed Joyner.

We have found that we can change the children by education and opportunity, and that equals change for the whole family.

One of the earliest initiatives was building a garden camp, a free summer and afterschool experience for youth. Now in its 11th year, the garden camp has developed into a multi-faceted program that helps children learn key principles of being healthy and self-sufficient.

The Conetoe Family Life Center received additional funds from the NC Council of Churches – Partners in Health and Wholeness. Read more about their work in the RHIhub’s Rural Health Models & Innovations.

Joyner’s many years as chaplain at Nash Health Care has given him credibility throughout the county. He has managed to recruit a team of 25 hospital staff, social service professionals, faith-based workers, and other volunteers to help lead the center’s initiatives. The medical community has been on-board with Joyner since the center’s inception. In 2006, the Community Benefits Grants Program of Vidant Health awarded the Conetoe Family Life Center funds to help jumpstart their projects.

Kahla Hall, director for Vidant’s Community Benefits Grants Program, expressed that Joyner’s exuberance for sparking positive change is what makes the Conetoe Family Life Center a success. “He’s determined. He’s a visionary. He sees what can be done, not just in one area, but in lots of areas. Not just in health, but in economics,” she said.

As the garden expanded from 1 acre to 17 and from 1 site to 4, the garden camp program grew with it. So far, 60 students ages 4 to 18 have rotated through classes specific to physical well-being, educational enhancement, social and human development, and socioeconomics – all areas in which Edgecombe County lags. 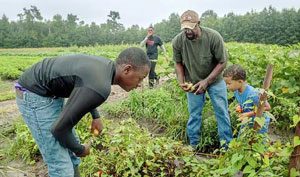 Students of all ages get on-the-job training in the gardens with Reverend Joyner.

Classes take an in-depth look at family genetics and how to prevent chronic diseases. Joyner also encourages the students to make it their goal to live as long as possible through maintaining healthy habits. Cooking classes and nutritional training teach the youth to be conscious of what they are putting into their bodies. The center is currently developing its own curriculum based on these concepts.

The first day of the garden camp, Joyner was shocked and inspired to see 35 students show up for registration, given the camp’s 5:30 a.m. start time. The fresh air and calisthenic exercises had an immediate effect. By the fourth week of the camp, the kids were running several miles at one time. One woman who worked at the camp was able to eventually cut her daily pill intake from 28 down to 7.

While many of the educational components are taught through on-the-job training in the gardens, the program also teaches subjects like math, science, financial planning, and home maintenance.

He has built up skills for jobs because those contribute to health as well. If you don’t have money, you can’t afford to buy food or pay for medication. They all play a part in social determinants.

Hall commented on Joyner’s educational focus, “He has built up skills for jobs because those contribute to health as well. If you don’t have money, you can’t afford to buy food or pay for medication. They all play a part in social determinants.”

Out of those who have come through the garden camp, high school graduation rates have improved from 40% to 100%. This year alone, four students are receiving full ride college scholarships. Students are pursuing majors and careers like agribusiness, electrical contracting, physical therapy, and culinary art – all skills that have been introduced through the garden camp.

You Reap What You Sow

The students who attend the garden camp are not immune to the social disparities that haunt the community. For instance, a majority of the students involved do not have a father in the home. To break these kinds of negative patterns, the camp’s courses use gardening principles to teach social and human development. 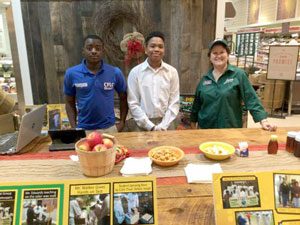 “You have to sow the things you really want to reap,” teaches Joyner. As with all of his lessons, Joyner gets at the soul of an issue to bring about lasting change. “It starts with respecting others and respecting yourself.” His strategy is working. This year’s graduating seniors will be the first group with no unplanned pregnancies.

Because Edgecombe County ranks so poorly in socioeconomic factors, the garden camp teaches youth the benefits of producing their own food to avoid prolonged dependence on government aid. The students are being equipped with business skills by learning how to sell their produce to local hospitals, schools, restaurants, businesses, CSA operations, and at farmers’ markets. Ninety-eight percent of their sales are used toward the development of youth and families in the Conetoe community. These sales also make it possible for much of the produce to be given away to area youth and families in need.

Hymana’s father passed away from high blood pressure, diabetes, and dialysis complications several years ago. As a result, Hymana and her siblings joined the garden camp program to help prevent the onset of similar health problems in their own lives. At age 8, Hymana became a certified bee keeper for the center’s 60 hives (the bees are a project the youth started to pollinate the gardens and produce honey to sell). 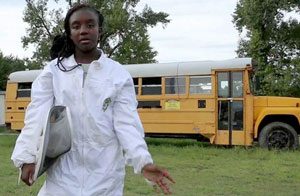 Tationa Hymana in her beekeeper gear and ready to work on the hives stored in the bee bus.

“They kept pushing me, saying that I could do it. I wanted to set an example,” conveyed Hymana on her reason for becoming certified so young. Up until that point, the minimum age for certification was 11 years old. It was Hymana who successfully petitioned the County Commission to change the age requirement. Now 13 years old, she teaches others to work the hives.

Hymana’s respect for Joyner is one of the reasons she is so committed to carry on the work that he started. “He is a man who would do anything to teach kids. He will put the kids before himself,” emphasized Hymana.

They are inspiring the community to make lasting changes. Because of the principles the youth bring in, families have changed their eating, cooking, and lifestyle habits.

Joyner says that the economic and health improvements in Conetoe are because of the youth. “They are inspiring the community to make lasting changes. Because of the principles the youth bring in, families have changed their eating, cooking, and lifestyle habits,” he said.

Their impact has extended far beyond Conetoe. The garden camp has become a model for 21 other garden programs with a similar mission that have launched throughout Edgecombe and surrounding counties.

The center’s partnering hospitals have also seen positive results from Conetoe Family Life Center’s active efforts to decrease health risks for area residents. The number of emergency room visits has dropped. Patients are better managers of their chronic disease conditions, reducing their need for medication while consuming healthier food. The Conetoe Family Life Center is partnering with the Brody School of Medicine at East Carolina University to measure and evaluate additional results to continue the effectiveness of the center’s programs.

As for Hymana, her aspirations are high. Joyner predicts that she will become a master beekeeper (the greatest of 3 certification levels) by the time she graduates from high school. “Her new story is that [she and her family] are now monitoring their health through nutrition to make sure they overcome the genetics that have plagued their family for a long time,” he said. “That’s living consciously.”