The U.S. population is aging. Today, there are more than 46 million older adults age 65 and older living in the U.S.; by 2050, that number is expected to grow to almost 90 million. Between 2020 and 2030 alone, the time the last of the baby boom cohorts reach age 65, the number of older adults is projected to increase by almost 18 million. This means by 2030, 1 in 5 Americans is projected to be 65 years old and over.

The issue of aging is especially important in rural areas because residents tend to be older, on average, than those in urban areas. Older adults also disproportionately live in rural areas. In 2010, one-quarter of all adults 65 years and older lived in rural areas.

This map, based on 2010 Census Data, shows the percent of the population over age 65 by county: 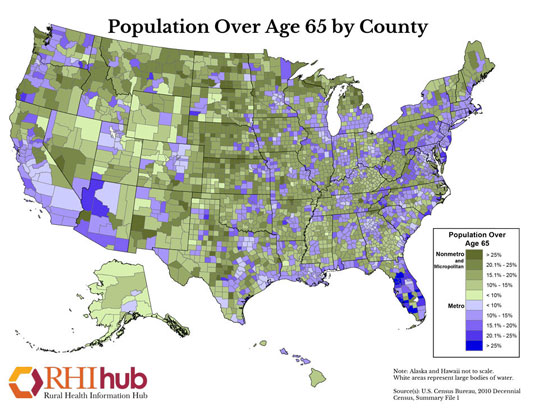 With an aging population comes an increasing need for healthcare, long-term care, and social services to support older adults as they age. Adults over age 65 have different healthcare needs than children and younger adults because they may have multiple chronic health problems such as diabetes, heart disease, arthritis, depression, and hypertension. It is estimated that 90% of adults over age 65 experience one or more chronic condition, and need specific treatments and medical care, setting them apart from the rest of the population.

Older adults not only rely on their primary care physician, but also on long-term care services and supports. Teams of physicians, long-term care assistants, nurses, social workers, and family caregivers often work together to provide tailored and coordinated care to older adults. Access to health care is critical for older adults to age in place.

Because many retirees are choosing to move to rural destinations and keep their independent lifestyle, many rural counties are naturally becoming retirement communities. However, these communities have fewer options for geriatric care teams and accommodations specifically designed for older adults, such as retirement communities and assisted living facilities.

Aging Statistics
Website
Provides general statistics on the aging of the U.S. population, including what percentage of the population is over 65.
Organization(s): Federal Interagency Forum on Aging Related Statistics

Projections of the Size and Composition of the U.S. Population: 2014 to 2060
Document
Gives an overview of the size and characteristics of the older adult population today, as well as projections about the population through 2060.
Author(s): Colby, S., & Ortman, J.
Organization(s): U.S. Census Bureau
Date: 3/2015